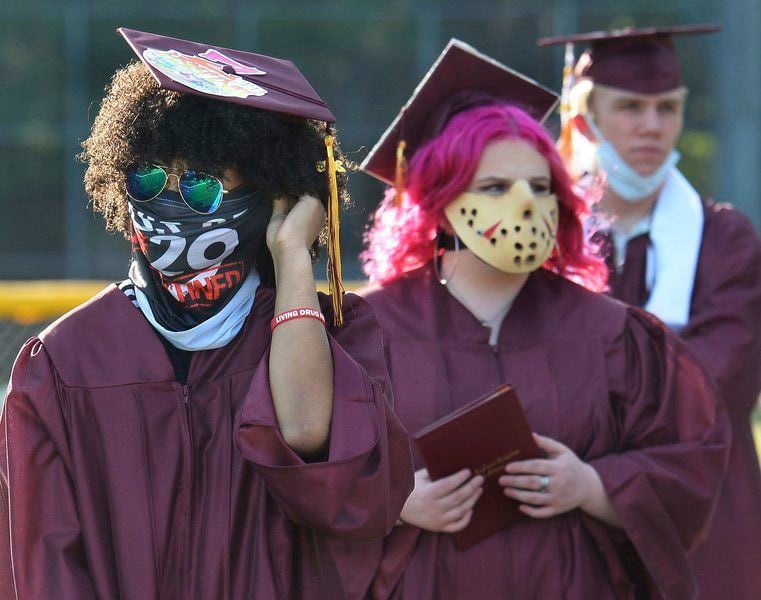 CARL RUSSO/Staff photoWhittier graduates Zaria Collazo, left, and Lexi Clark, each wearing a unique mask, wait for their names to be called during the ceremony. 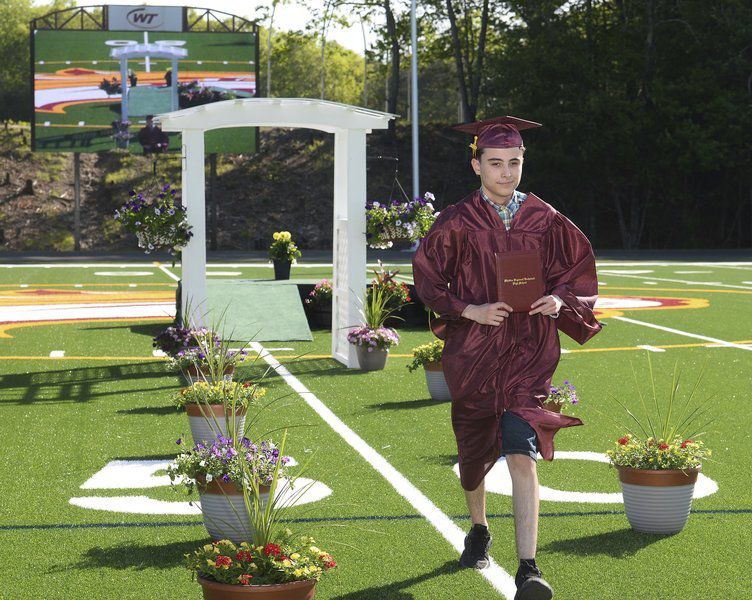 CARL RUSSO/Staff photoWhittier Regional graduate Elias Andino carries his diploma as he walks across the school's football field during the graduation ceremony.

CARL RUSSO/Staff photoWhittier graduates Zaria Collazo, left, and Lexi Clark, each wearing a unique mask, wait for their names to be called during the ceremony.

CARL RUSSO/Staff photoWhittier Regional graduate Elias Andino carries his diploma as he walks across the school's football field during the graduation ceremony.

It wasn't as bad as they expected it might be — in fact these students said under the circumstances it worked out pretty well.

Members of the Whittier Regional High Class of 2020 arrived at their school Wednesday evening of last week for a socially distanced graduation, the first of three nights of events, with seniors scheduled to be honored in alphabetical order.

Graduates said the event was better than expected, considering the restrictions caused by the COVID-19 pandemic. Many of them thought it would end up being an impersonal “virtual” event only.

They arrived in vehicles with parents and other family members and were ushered onto the school’s sports field, where one by one the graduates, who had already received their diplomas, stepped onto a platform. “Pomp and Circumstance” played over loudspeakers as Principal Chris Laganas called out the names of graduates.

They stepped off the platform, walked through a white pergola, past rows of flowers and onto a path, where they met back up with their family members and photos were taken.

“I love that they did this for us,” said graduate Killian Barry of Bradford, who was with her parents, Jim Barry and Kerrie LePage, and Killian’s stepfather, City Councilor Colin LePage. “This is much better than a virtual graduation.”

Seniors had previously received graduation packages that included their yearbook, diploma, cap and gown, and a surprise — a personal letter of congratulations from an English teacher who knew them.

Graduate Breanna Bowman of Haverhill wore a mask bearing the message “I did it.”

“I’m happy that we got this recognition,” said Bowman, who majored in early childhood education.

No one, including guests, was permitted in the stands of the field, officials said.

“Under the circumstances, this is better than nothing and the school did a really good job setting it up,” Ashley said.

Owen Anderson of Haverhill, an electrical shop graduate, said he was happy to have his family members with him, rather than be distant from them as would have happened if they were in the stands.

“I’m grateful for this and I also get to see some of my friends,” he said.

Identical twins Hannah and Hayley Bourque of Haverhill, both of whom majored in culinary arts, crossed the platform together.

They were happy to have an in-person graduation, albeit a socially distanced one.

Graduate Angel Alvarado of Newburyport, a carpentry major who arrived with his mother, also enjoyed having an in-person graduation.

“It’s sure better than sitting in front of a computer,” he said in reference to a virtual event.

Class President Isabelle Giunta of Newburyport recorded her speech to the Class of 2020 that will be included in a graduation video to be released following commencement exercises.

In her speech, she pays tribute to a classmate, David Dahlke of Rowley, who died in April from a medical condition.

“David always had a smile on his face and always had his friends' backs,” Giunta wrote. “Friends describe David as being the kind of person that would go out of his way to hold the door for you.”

Giunta told her classmates that despite the setbacks posed by the coronavirus crisis, they all persevered.

“Leaving Whittier Tech and transitioning into the real world makes us the next generation to step up and change our world for the better,” she said. “We are highly equipped and are so much more prepared than we know.”