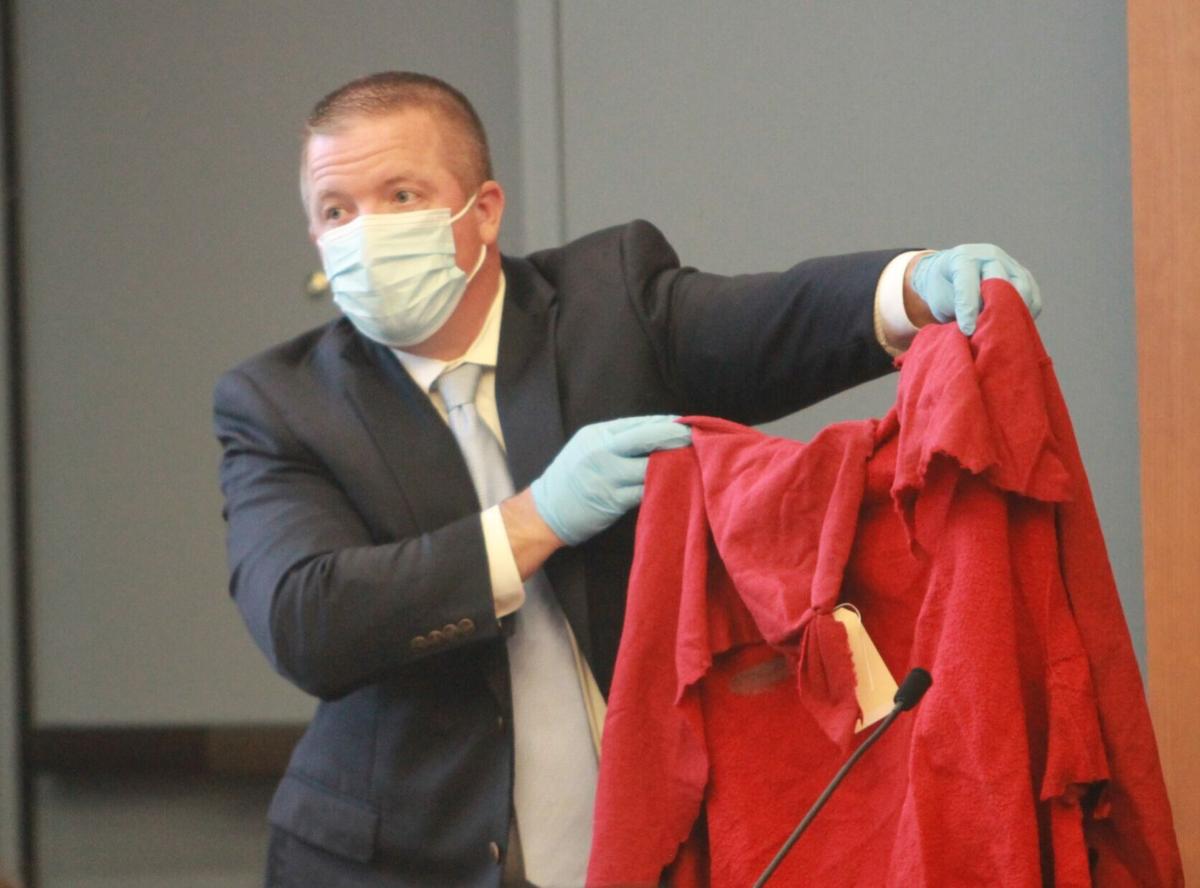 Massachusetts State Trooper and homicide detective Matthew Wilson shows the jury a sweatshirt that was removed from the body of Jeffrey Larkin after he was rushed to Holy Family Hospital in Haverhill after being shot on Grand Avenue. 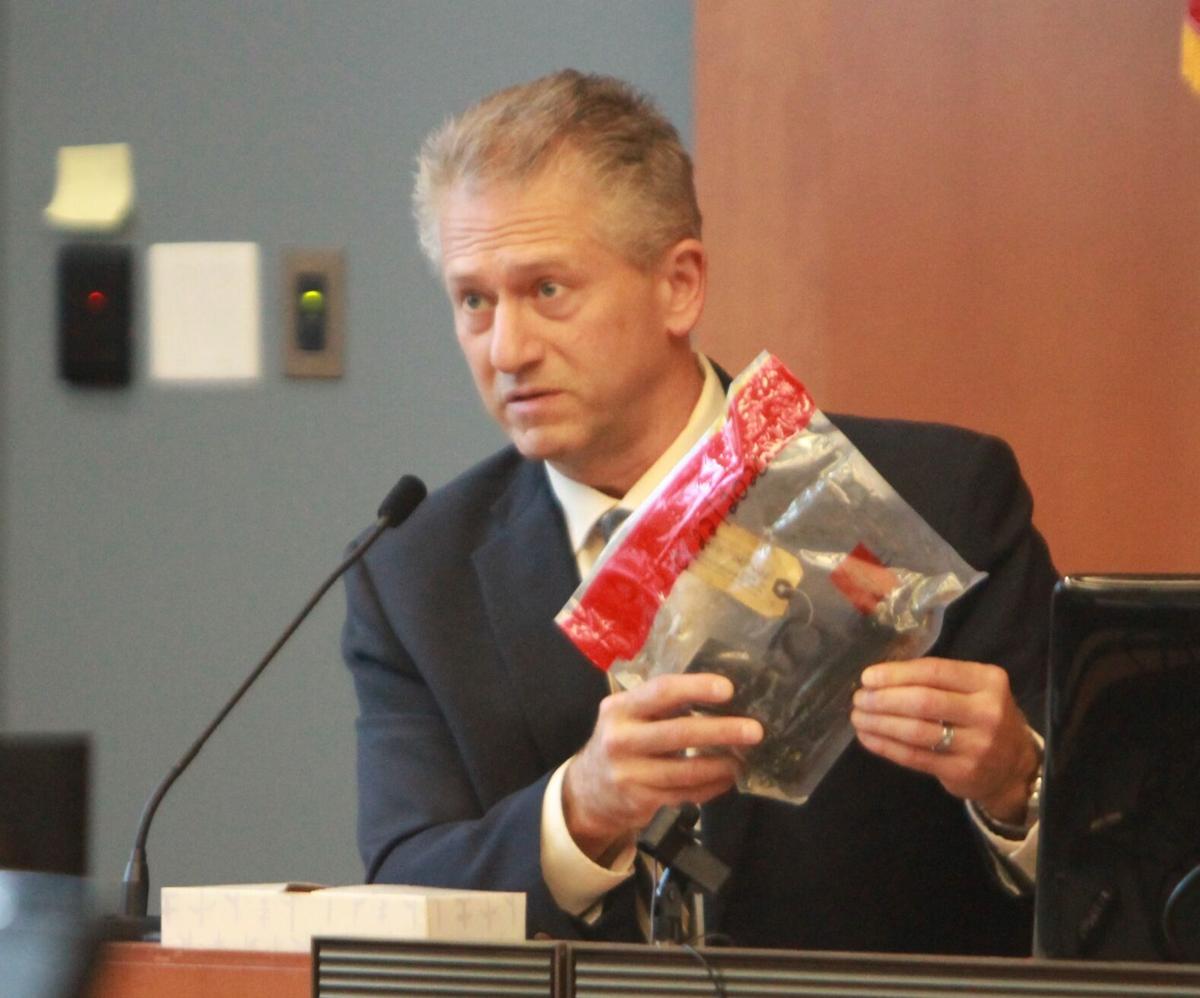 Massachusetts State Police Sgt. Glen Cote, a ballistics expert, shows the jury a handgun that was linked to bullet casings found at the scene of Jeffrey Larkin’s murder.

Massachusetts State Trooper and homicide detective Matthew Wilson shows the jury a sweatshirt that was removed from the body of Jeffrey Larkin after he was rushed to Holy Family Hospital in Haverhill after being shot on Grand Avenue.

Massachusetts State Police Sgt. Glen Cote, a ballistics expert, shows the jury a handgun that was linked to bullet casings found at the scene of Jeffrey Larkin’s murder.

HAVERHILL — A jury has been charged with deciding if Carlos Rivera is guilty of shooting Jeffrey Larkin of Haverhill to death on the night of May 6, 2018, on Grand Avenue, just north of downtown.

Following closing arguments by the prosecution and defense, Judge Janice Howe gave instructions to the jury prior to lunch on Tuesday, after which the jury went into deliberations. A decision is expected as early as Wednesday.

Howe had instructed the jury on the differences between first degree and second degree murder, and what the charges of possession of a firearm and possession of a loaded firearm mean.

According to police, on Sunday, May 6, 2018, just before 11 p.m., Haverhill police officers found Larkin, 40, on the ground on Grand Avenue near Emerson Street with a fatal bullet wound in his chest.

Rivera, 42, who police said goes by the nickname “Chin,” has been charged with Larkin’s murder, along with additional charges of possession of a loaded firearm and carrying a firearm without a license.

During his closing argument, Rivera’s defense lawyer, Edward Hayden, tried to convince the jury that Larkin was shot by Sky Stefanelli, the prosecution’s only eyewitness to Larkin’s murder.

Hayden said Stefanelli was the one who was furious with Larkin on the day of his death over $10 he owed her, which Hayden said was motive for her shooting Larkin.

He said Stefanelli had been smoking crack cocaine that day, that her ability to recall information was compromised and that she’d been arguing with Larkin throughout the day over the $10.

Hayden said Stefanelli told different versions of events to friends, to the police and to the grand jury as to what happened the night Larkin was shot and killed on Grand Avenue, near Emerson Street.

“She’s untrustworthy, she’s transactional and she gets impatient if she doesn’t get what she wants,” he said, adding that the drugs Stefanelli was using that day compromised her ability to tell the truth.

Hayden also downplayed evidence in the case, saying police found no evidence such as fingerprints or gunpowder residue and that Rivera did not appear in any of the videos the jury was shown during the trial.

Those videos included images of a black Kia that Stefanelli said she was driving that night, with Rivera in the front passenger seat and her mother Carly Carney in the rear seat, just minutes before Larkin’s murder.

Hayden also questioned Stefanelli’s reliability as a witness since she’d made a deal with the district attorney’s office to testify truthfully in return for dropping the charge of being an accessory after the fact.

“Remember, back then she was a bad person,” Hayden said. “You can’t make a good deal with a bad person.”

Hayden concluded his argument saying Stefanelli had motive and not Rivera.

During testimony by state police investigators, the jury was told that two 9 mm cartridge casings found near Larkin’s body were proven to have been fired from a black, 9 mm Smith and Wesson semi-automatic pistol.

That gun, police said, was retrieved from a river behind the home of a relative of Shawn Brown of Methuen, who testified that he got the gun from Stefanelli and later told his brother to get rid of it. The brother told police where to find the gun.

Assistant District Attorney Susan Dolhun tore into Hayden’s assertion that Sky was the shooter and pointed to testimony that it was Rivera who shot Larkin.

She said GPS tracking data showed that in the minutes before the shooting, the Kia had traveled through Lafayette square, where it pulled into a parking lot and the occupants, Stefanelli, Rivera and Carny watched Larkin walk past a convenience store then up Winter Street.

“What she (Stefanelli) told you was substantially corroborated by evidence,” Dolhun said. “Sky told you she was with Carlos Rivera before, during, and after the death of Jeffrey Larkin.”

Dolhun reminded the jury that on the morning of May 7, after police arrived at a Lowell home where Stefanelli had been staying with a friend, they found Rivera hiding behind a bedroom door. She told the jury that an innocent person would have no reason to hide from police.

Dolhun said there is no doubt that Sky Stefanelli was involved in this crime.

“She was present at the scene (of the murder), she drove Carlos Rivera from the scene, and she helped him hide then later get rid of the murder gun,” Dolhun said.

“There is no question her behavior is criminal. She is guilty of being an accessory after the fact, which is what she was charged with from the beginning, because that was the charge that was supported by the evidence.”

Dolhun wrapped up her argument saying the evidence proved beyond any reasonable doubt that Rivera shot and killed Jeffrey Larkin with deliberation and intent.

“If you find him not guilty, he will be getting away with murder,’” she said.