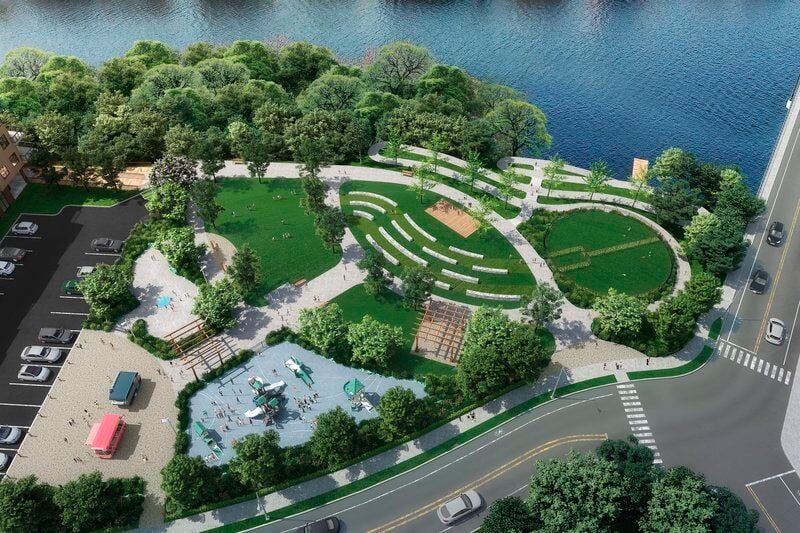 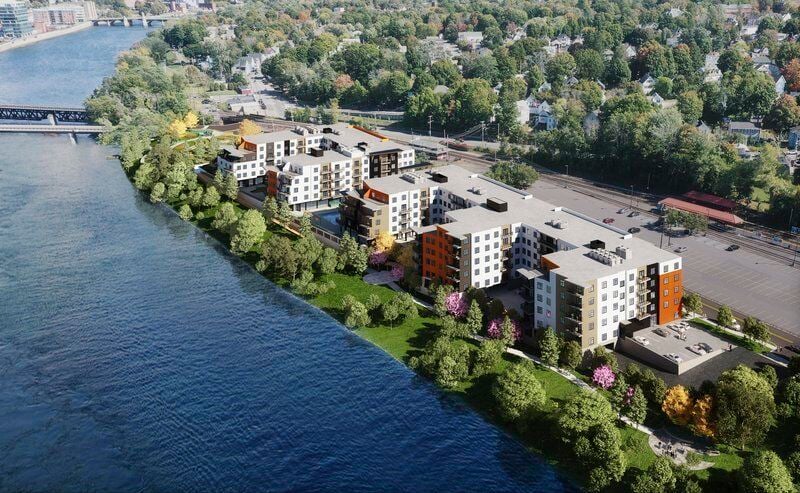 Courtesy renderingAn artist's rendering shows the project as it will look along the Merrimack River in Bradford.

Courtesy renderingAn artist's rendering shows the project as it will look along the Merrimack River in Bradford.

The City Council has approved the biggest riverfront housing development in Haverhill’s history.

The $100 million project planned by the Procopio Companies of Lynnfield will transform the long-vacant Ornsteen Heel factory property in Bradford into a 290-unit apartment complex with a variety of amenities, including a spacious public park with an amphitheater.

The council approved the project last week by an 8-1 margin, with Council President Melinda Barrett casting the lone dissenting vote. Barrett, who lives in Bradford, said she could not support the development because it would cause parking and other problems for Bradford residents.

During a public hearing on a request for a special permit for the Procopio Companies, Mayor James Fiorentini called the project “easily the best proposal we’ve had in 20 years.” He said it will create a “beautiful waterfront park” for public use.

Fiorentini said the park, which will be next to the southern end of Comeau Bridge, was made possible because the developer has an agreement to buy the Skateland roller skating rink property and an abandoned gas station next to the bridge.

“We all know that traffic is challenged in that area but this is a unique, once in a lifetime ... once in several decades opportunity to improve it,” he said.

The project — called “The Beck,” a term for a mountain stream — is expected to generate $19 million over 20 years for city, the mayor said.

Tailored to professional single people and couples who generally rely on public transit such as the commuter rail, the project is close to the Bradford train station and will offer 30 studio apartments, 148 one-bedroom units, an additional 21 one-bedroom units each with a den, and 91 two-bedroom units.

Ten units will be reserved as affordable housing, with rental prices set at the area’s median income.

Retail stores and restaurants are planned for the complex. Most of the 320 parking spaces for residents will be under the building and visible only from the river. The project will provide 27 public parking spaces.

In approving the project, the council issued special conditions that include the developer installing emergency alarm call boxes in and around the public park and walking trail, similar to the kind installed on the city’s section of the rail trail; doing some landscaping of the nearby Wood School playground; ensuring that any traffic improvements be in place and functional before the city issues occupancy permits; meeting requirements set by all city department heads; and improving traffic lights on the north side of the bridge and a pedestrian signal where there is a crosswalk on Laurel Avenue.

Councilors also asked the developer to look into the use of Zip cars, a service that allows people to rent cars for short trips.

Barrett expressed her opposition, including her thoughts on traffic along Laurel Avenue, South Elm Street, the Comeau Bridge and side streets that drivers might use to get around any traffic backups going toward and coming from Route 125. She also objected to several waivers the developer requested, including for the height of the buildings and the number and sizes of parking spaces.

“What happens when they replace the Basiliere Bridge?” Barrett asked of a project planned by the state in the next several years, which will force more traffic onto the Comeau Bridge and into the area of the Procopio Companies complex.

“What happens to Bradford?’’ Barrett said of her concerns about traffic congestion. “It becomes an island you cannot get off of. And it’s also a food desert .... We don’t have any supermarkets.”

Councilor William Macek said Haverhill is eventually going to be known for tall buildings and “projects like this, all up and down the river in Haverhill, on both sides.”

“Maybe it won’t happen in my lifetime, but that’s the future of this city,” Macek said.

Following the meeting, Michael Procopio, CEO of the development company, said he appreciated the thoughtful comments and questions from the council. He said he looks forward to continuing to collaborate with the city as the project moves to the design and construction stages.

“We are thankful for the significant community feedback received in recent months, particularly with regards to the park,’’ he said. “Public comments informed the vision for the park’s special design elements making it truly unique to Haverhill.’’

The project will include a roughly 1,500-foot-long river boardwalk, which will be open to the public.

Procopio said members of the public were involved in designing the complex’s public space, including the park, to ensure it would satisfy the wishes of Haverhill residents.

“We created one large park designed with public input, along with small pocket parks and shade areas, all connecting with the boardwalk,” he said. “The entire riverfront will be accessible to the public.”

Procopio said a seasonal dock will allow for residents of the complex and the public to launch small water craft such as kayaks and canoes.

He said his company was awarded a MassWorks grant of nearly $2 million to improve roads and intersections next to the property and in the surrounding area. The company is investing more than $500,000 for that work as well, he said.

He said road work will include realigning Railroad Avenue so drivers will have greater ease on that street; widening Railroad Avenue and sections of South Elm Street, Blossom Street and Laurel Avenue; adding sidewalks and bike lanes around the project to link to those streets; improving crosswalks and adding traffic signals; improving access to the rail trail; and synchronizing traffic signals at both ends of the Comeau Bridge.

“This would be a massive improvement and will vastly improve safety,” he said.

Fiorentini said a traffic engineer reviewed the plan and determined the improvements will allow for improved flow of vehicles in the area.