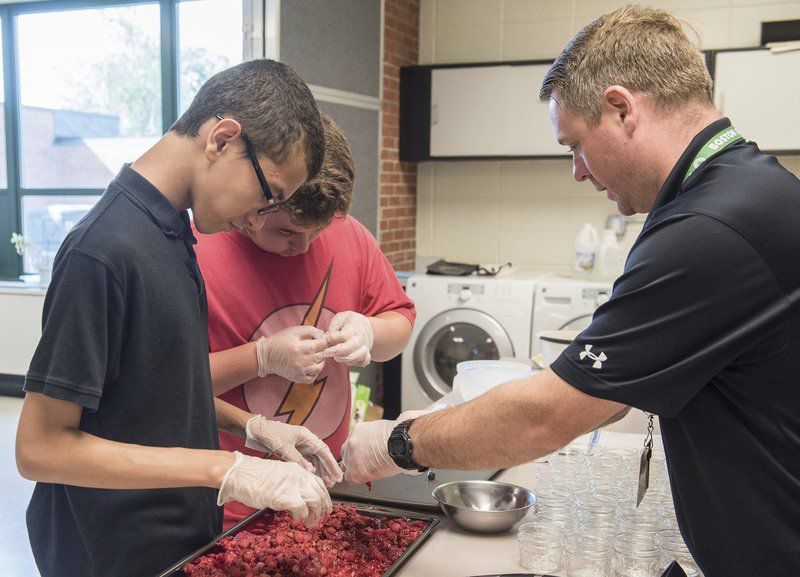 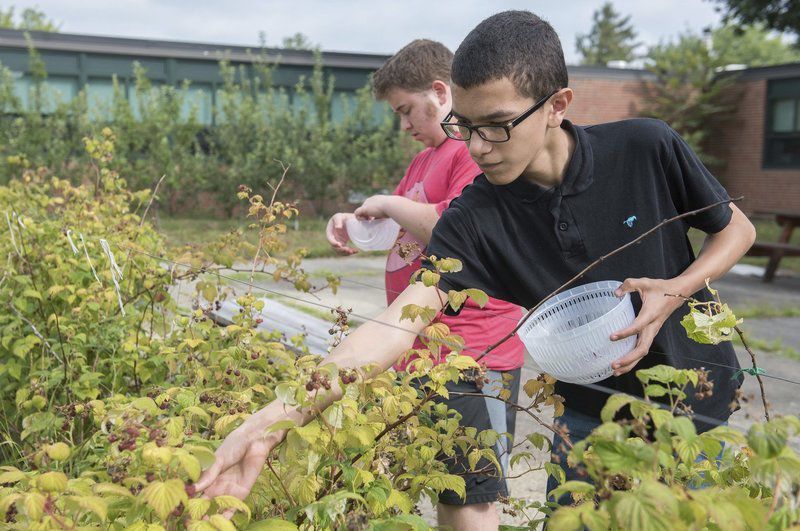 It's been a good season for growing raspberries and blueberries in the orchard at Haverhill High School.

Students with special needs attending an extended school year program this summer are enjoying a bounty crop which they have put to many culinary uses.

Their latest adventure involved picking raspberries from bushes they planted two years ago and making jam from scratch.

"We've been storing them in the freezer over the past few weeks until we had five or six gallons worth," said Jason Burns, a special education teacher who works with students in the school's learning garden program run by paraprofessional Nancy Burke.

About 50 children in the program have been harvesting raspberries and blueberries in the school's orchard, which is located in a courtyard surrounded by classrooms.

They've also been picking hot peppers, chives, tomatoes and cilantro in their salsa garden located in another courtyard.

Both the garden, which has raised beds, and the orchard, which is populated with dwarf apple, pear and plum trees along with the berry bushes, are wheelchair accessible.

This feature allows students with a range of disabilities to take part in the program.

"We're the first public high school in the country to have an orchard on campus," Burke said.

The pear trees still are young, as are the apple trees, but Burke is hoping to have enough apples this fall for students to enjoy.

She said students plant vegetables in their learning garden in the spring, care for them throughout the summer, then harvest their crop when it's ready.

Fall vegetables are usually entered into the Topsfield Fair for judging — and usually end up winning ribbons, she said.

"This will be our fifth year at the Topsfield Fair," Burke said.

Burke completed cancer treatment earlier this year and said returning to the high school in April after six months could not have come too soon.

"During my time being treated, all I could think about was returning to my students and getting the garden up and running," she said.

Upon her return, students in the school's art program surprised her with a mural they painted in a hallway leading to the courtyard orchard.

Above the door they painted the tribute, "Ms. Nancy's Orchard."

"They told me I'll always be remembered for doing all the hard work for the gardens," she said.

All of the jam-making happened in the school's life skills apartment, where students get hands-on practice in using kitchen appliances such as blenders and toasters, and learn basic food preparation skills.

"We already made blueberry smoothies, as well as frozen smoothies," said 16-year-old Jacob Brindle. "I loved making and drinking smoothies."

Edgar Pacheco, 15, said he enjoyed harvesting the raspberries that went into the jam.

"I loved picking them and I really loved eating them," he said.

The two boys were carefully removing any remaining stems on their berries when their teacher, Tyler George, told them not to worry about damaging the berries.

"We're just going to smash them up anyway," he told the boys.

Julia McLaughlin, 18, who is entering her senior year, stirred the berries that were simmering in a large pot on a stove.

When the mixture cooled, she added sugar and pectin.

"I didn't realize how many steps it takes to make jam," Julia said.

Once the finished jam was cooled, it was transferred to 4-ounce Mason jars and each student took one home.

Burns said students have enjoyed a variety of other food they helped make over the summer, including their own "beach" pizza, deviled eggs, caesar wraps, crepes, pasta salad, guacamole, queso dip and other tasty items.

"At the same time,'' Burns said, "they are learning food preparation skills such as cutting, measuring and mixing.''