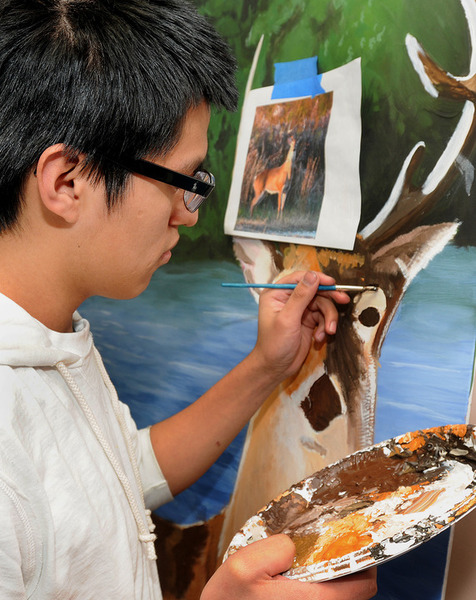 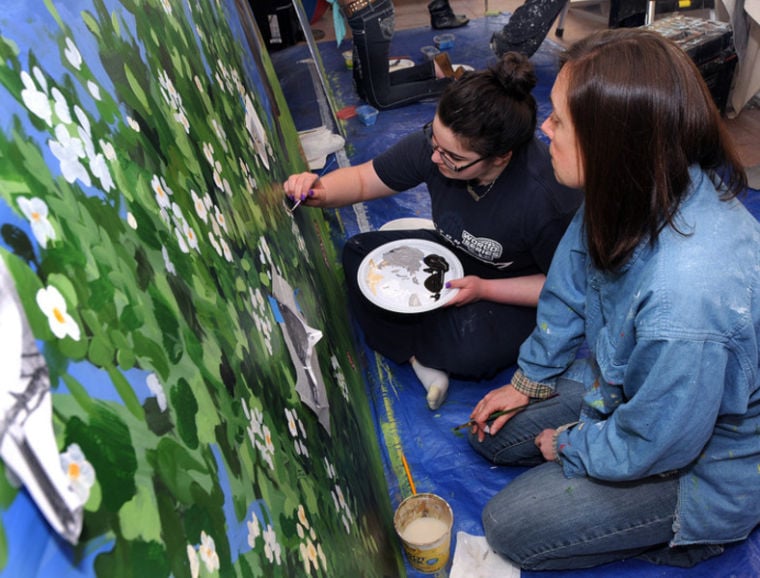 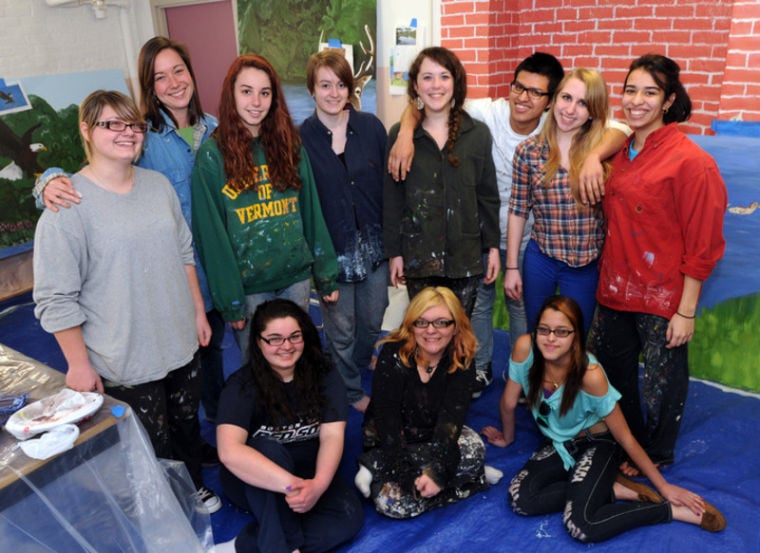 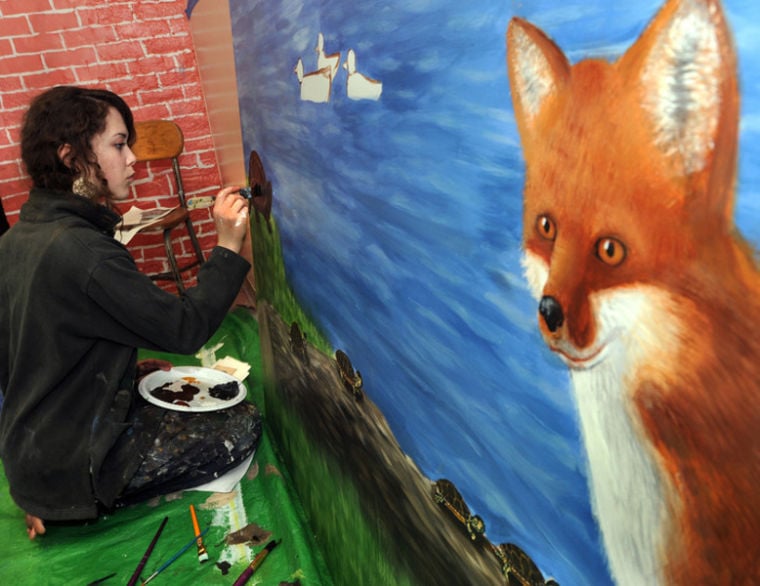 Haverhill High freshman McKenna Judge works on her part of the mural which will be placed along the Bradford Rail Trail.

Haverhill High freshman McKenna Judge works on her part of the mural which will be placed along the Bradford Rail Trail.

Since the beginning of January, a group of hard-working student artists from Haverhill High School have gathered at Burnham School twice a week.

In a basement cafeteria converted to a temporary art studio, they’ve been painting images of nature along the Merrimack River.

Among them is sophomore Arielle Dube. Just like artists have done for centuries, she dabbed her paintbrush into a painter’s palette and gently applied flecks of white to the cap of a reddish-orange American Caesar’s Mushroom, the kind of fungi you might find along the Bradford Rail Trail.

Arielle double-checked a copy of the National Audubon Society’s Field Guide to North American Mushrooms to make sure the mushrooms she was painting looked as similar to the photo as possible.

”I think it’s come a long way,” she said about the large mural she is helping create as public art for the Rail Trail.

Arielle and her fellow students are doing the art work to be placed along the trail to make it more attractive to hikers and bikers. It is part of a larger effort — the city is also asking local sculptors to donate their work to the trail along the river.

Arielle and Haverhill High School art teacher Ellen Mullane were recently working on one outdoor scene that will be part of the large mural. They were sitting on a blue tarp on the basement floor of Burnham School. Their panel featured images of birds resting on the branches of a wild rose bush, a beaver, grass and other images of wildlife.

“This is one of the most committed groups of students I’ve worked with,” Mullane said about Dube and the other students she and local mural artist Liz Persing have been assisting.

Eleven students are involved in the project — four freshmen, four sophomores, two juniors and one senior. They all have a flair for art, their teachers said, and they are all committed to the project, knowing their creation will be seen by all who walk the trail.

Tina Fuller, director of the city’s Access 21 program, said the project combines community service, art, and biology and the students who are participating are in an after-school Access 21 program at Haverhill High.

Working on 12 4-by-8-foot panels, the students have been painting images of native plants such as sumac trees, and cattails as well as animals such as deer, foxes, coyotes, great blue herons, eagles, seagulls, geese, beavers, turtles and turkey vultures. The panels will be mounted on the back wall of the Arthur Sharp True Value Hardware on Middlesex Street, which abuts the rail trail, creating an 80-foot-long by 20-foot-high mural for all to see.

Senior Carlos Velazquez volunteered to help paint one panel to get some experience and improve his artistic skills.

”A lot of people are going to see what we’ve done,” he said, noting that his contribution is a wildlife scene featuring a male deer looking at the viewer. “The challenges was trying not to focus on any one detail, but to focus on the bigger picture.’’

Freshman McKenna Judge stood in front of her panel and studied the face of a fox she had painted.

”Getting the facial structure right was not easy,” she said. “I had to keep referring to a photograph of a fox to get it right.”

She said she learned a lot by working on this group project, including how to take criticism knowing it would only help make what she painted better.

”All of the input I received improved by work,” she said.

”What’s cool about this project is that each student is painting his or her own panel,” Persing said of the young artists she has been doing the project with. “I think it makes them feel that it’s theirs and that they’ve taken ownership.”

Persing was chosen as the Artist in Residence for this project. She is being assisted by Ellen Mullane, who teaches art at Haverhill High. Haverhill High School art teacher Susan Blim is also contributing to the mural and will be creating three-dimensional images of trees made of metal.

The students’ work is expected to be installed this summer in partnership with the Friends of the Bradford Rail Trail.

Access 21 is an after-school program at Haverhill High School funded by a 21st Century Community Learning Centers grant from the Massachusetts Department of Elementary and Secondary Education. Other activities of Access 21 are Internships, Glee Club, Robotics, Photoshop, and Lifeskills Enrichment.