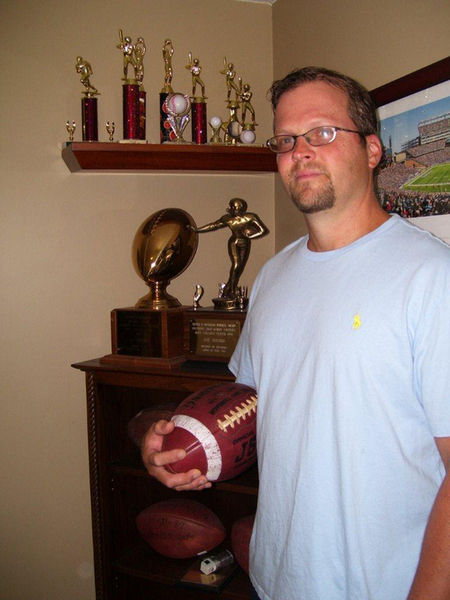 Jeff DiBurro with memorabilia from his football days 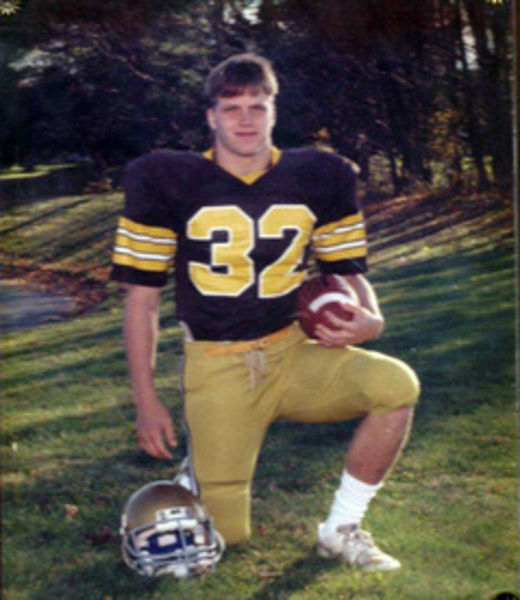 Jeff DiBurro was a two-time most valuable player at Haverhill High. 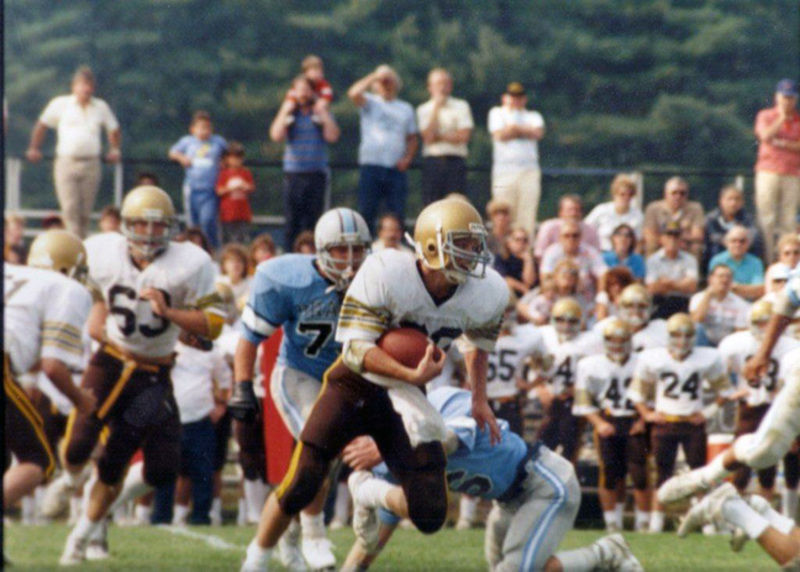 Jeff DiBurro runs the ball for Holy Cross during his college days.

Jeff DiBurro with memorabilia from his football days

Jeff DiBurro was a two-time most valuable player at Haverhill High.

Jeff DiBurro runs the ball for Holy Cross during his college days.

In his athletic prime at Haverhill High, Jeff DiBurro was a star many times over.

He was outstanding in three sports, made several all-star teams and remained a celebrated hero to his school and community.

Today, he counts his blessings after nearly losing his life to a brain aneurysm. Not a day goes by that he doesn’t reach out to God, thankful for a second chance.

“Life is fragile,” said the 43-year-old. “Live each day like it was your last. You never know when it will end.”

DiBurro had the world by the tail, destined for success. The 1989 HHS graduate had amassed nine varsity letters in football, basketball and track. As a scholar, he graduated in the top 5 percent of his class.

The DiBurro name remained golden, much like his family’s rich history in this city.

In football, he was a formidable running back, slipping off defenders like butter on a hot knife. A 100-yard rushing game was typical for the 6-foot, 180-pound running back.

On the very last game of his high school career against border rival Salem, DiBurro turned it turned into a Thanksgiving Day debacle, rushing for four touchdowns and a whopping 234 yards.

The hugs he got that day from Coach Bob Pike and the rest of his teammates nearly broke his back. It was the coup de grace that paved the way toward a stellar college career at Holy Cross.

Few athletes — if any at the time — put together back-to-back 1,000-yard seasons and received such “Most Valuable Player” selections. A Shriner’s Game nod against the very best players in Eastern Massachusetts helped boost his resume.

“I never came off the field,” DiBurro recalled. “When I wasn’t running with a football, I was a defensive back, returning punts and kickoffs. You might say I put in a good day’s work for my team.”

Three years of Pop Warner football certainly paid dividends. So did his speed and agility. In track, he was a sprinter with a 100-meter dash time of 11.1 seconds. As a starter in basketball, he was the go-to guy who usually made all the right moves. In a day of specialized athletes, diversity was DiBurro’s calling card.

When he wasn’t on an athletic field, he was working in the family business at DiBurro’s function hall in Ward Hill, helping his now-passed father, Henry, with the operation. His mom, Carole, was a well-respected school teacher in the city. Both parents were his best fans.

DiBurro’s exploits followed him to Holy Cross, where he emerged with a championship, but not as a running back. He carved his niche as a free safety, which led to a Patriot League title his sophomore year. After graduating with a degree in economics, off he went to join the business world.

He married, enjoyed fatherhood with two young sons, along with a career in sales, first with CPS Direct and later with Cisco Systems.

And then his world was shaken to its core. A ruptured brain aneurysm nearly took the ultimate toll on DiBurro, leaving him with no peripheral vision in his left eye and leading to an unexpected early retirement — at age 30.

For the next six weeks, his prognosis remained fragile and he had very little mental recall. Three years of rehabilitation followed. He suffers side effects to this day as he continues making the best of a tenuous situation.

“I have some short-term memory problems,” he said. “I haven’t been back to work in 13 years.”

Now remarried with four boys — two of them stepsons — he’s back on the gridiron cheering them on and lending moral support. All four boys are fine prospects in the Timberlane Regional School District, including two 17-year-olds who play for the Owls.

As if his family isn’t enough to keep him occupied, there’s his Colonial home which sits on 2½ acres over 4,000 feet in Plaistow. His carpentry skills are often requested from a friend or relative in need. No slouching around, feeling sorry for himself. DiBurro jogs, lifts weight and keeps his physical condition intact.

“I try to be a role model for my kids,” he admitted with pride. “Every day is a gift. I shouldn’t be here. Without the hand of God guiding me, I wouldn’t have pulled through. I’m totally blessed.”

Always a Hillie at heart, you’ll catch him following his alma mater, appearing at Thanksgiving Day games, remembering the time he ran roughshod and knocked the stuffing out of his opponents.

“Haverhill High still burns in my heart,” he said “That flame will never die.”