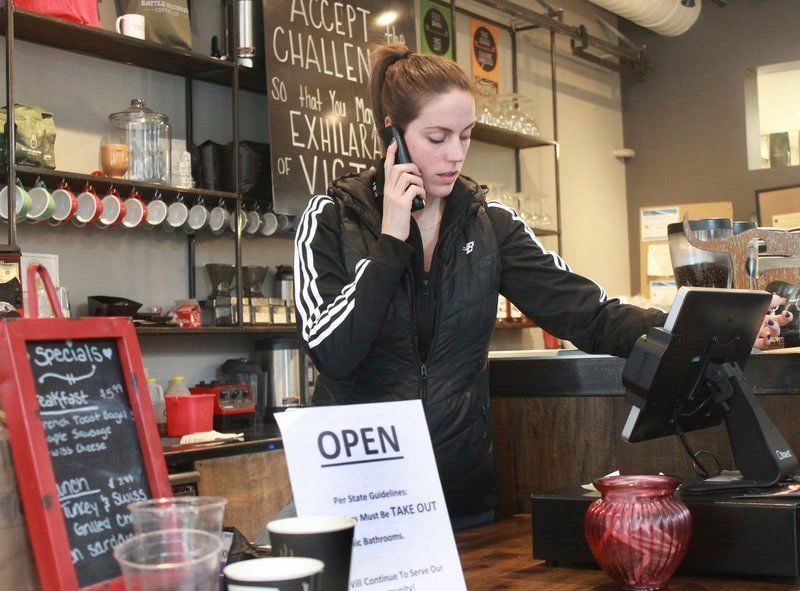 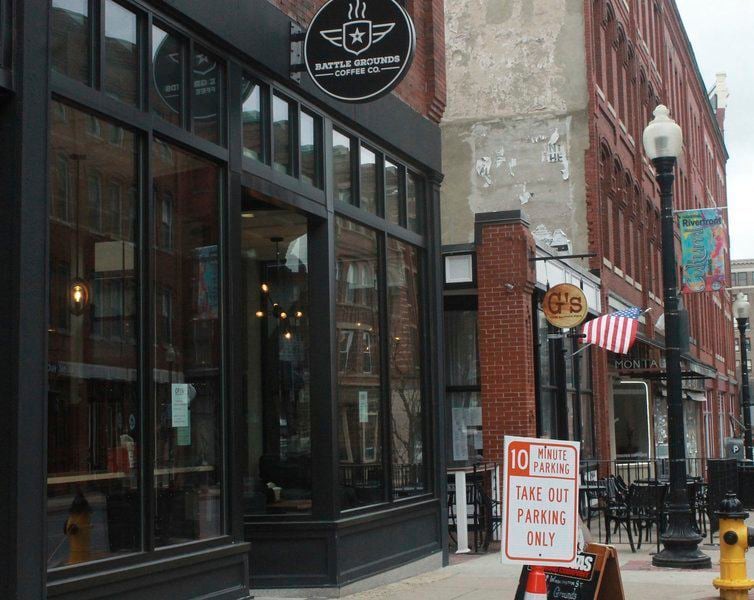 MIKE LABELLA/Staff photoThe city installed these temporary 10-minute parking signs in front of downtown restaurants to support of their take-out only business.

MIKE LABELLA/Staff photoThe city installed these temporary 10-minute parking signs in front of downtown restaurants to support of their take-out only business.

It took more than a decade to build Haverhill's downtown restaurant row — an area packed with customers on weekends and some nights during the week.

The restaurant district has been a major component in the resurrection of downtown, escalating it from a sleepy urban center with old empty factories to a bustling business area.

Restaurant owners and city leaders are trying to keep the coronavirus crisis from crippling or destroying the district.

Dana DeFranco of Battle Grounds Coffee Co. on Washington Street met this week with other downtown restaurant owners to discuss the situation.

"We touched on a variety of topics, including why and how to apply for low-interest business loans," DeFranco said. "The fear is the future is an unknown, so we're asking city officials to be transparent with whatever they know. We're placing orders for food and if that food is delivered and then we're told we have to shut our doors, we can't send it back."

A matching restaurant gift certificate campaign launched by the Greater Haverhill Chamber of Commerce was a success, but it ran out of money and is looking to recharge with new donations pouring in.

"The gift card program was a way to let customers know that we're hurting," DeFranco said. "The money customers spent went to keeping our doors open and maintaining what few employees some of us had."

For Dana and Sal DeFranco, the pandemic has been a double loss, as they were forced to close their coffee shop at the Riverwalk in Lawrence because of the crisis. They said employees who are out of work will be recalled once the crisis is over.

Dana DeFranco said the 10-minute take-out parking in downtown Haverhill should help make things easier for customer pick-up, as Battle Grounds continues to offer coffee and other hot and cold beverages, along with breakfast and lunch food. If you call ahead, they will bring the order to your car if you park in front of the business.

"We are surviving day by day," Dana DeFranco said. "Our crowd here likes to come in, sit down, do work, have meetings and interact with others but since that's no longer an option ... I'm just thankful that we're still open and able to make at least some money. And with many people staying home, they're purchasing our coffee online to brew themselves."

Sunil Samtani, owner of the Downtown Wine & Spirits liquor store on Locust Street, said although he is allowed to remain open, he had to put an expansion of the business on hold with so many industries being affected by the coronavirus restrictions.

"My current building is not big enough and, with the downtown growing, I'm looking to erect a new building next door that will be three times the size," he said. "I was supposed to close on my (expansion) loan, but now I have to put everything on hold."

Mayor James Fiorentini said even with the help of the city, some restaurants are destined to go out of business. He estimated that Haverhill's restaurants have suffered an 80 to 90 percent drop in business.

"There's no way around it, but we're going to do everything we can to assist," Fiorentini said. "Even worse off are the employees of these restaurants, bars, fast food establishments, doughnut shops .... Many are working for tips, and others, like cooks and dishwashers, are living on minimum wage, which is sometimes low, particularly in the fast-food industry.

"We will make sure the rule is enforced," the mayor said about allowing customers to use short-term take-out parking near restaurants.

In another effort to support the city's restaurants, the Greater Haverhill Chamber has launched a GoFundMe account. Customers who mentioned the chamber's gift card program before buying a card received a card of double value, up to $50. The chamber matched the gift card amount up to $50, with a limit of one card per household. Restaurants were reimbursed for the gift cards through a GoFundMe account that as of Tuesday, along with some additional donations outside of the GoFundMe account, had raised more than $24,000, with more donations coming in.

"The program is going incredibly well and although it ran out of money on Saturday (March 21), we have raised additional money and now with 35 restaurants participating, we are preparing to ramp it back up and will run it as long as we have money," chamber president Dougan Sherwood said on Tuesday.

Fiorentini gave the fund a boost with a $5,000 donation from the city's Community Development Block Grant program for the purpose of business retention. The mayor said the CDBG program has money for such a use and that the downtown is part of the CDBG zone.

"We want to do whatever we can to help our great downtown restaurants and their employees get through this extraordinary and historic crisis," Fiorentini said.