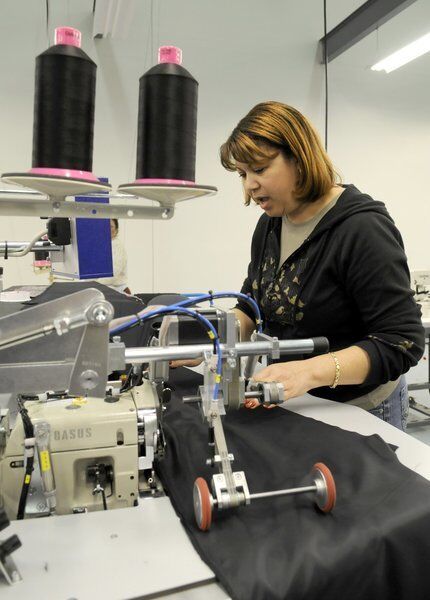 File photoMariara Garcia of Lawrence uses a high-tech binder machine to make suits at the Southwick factory when it was operating. 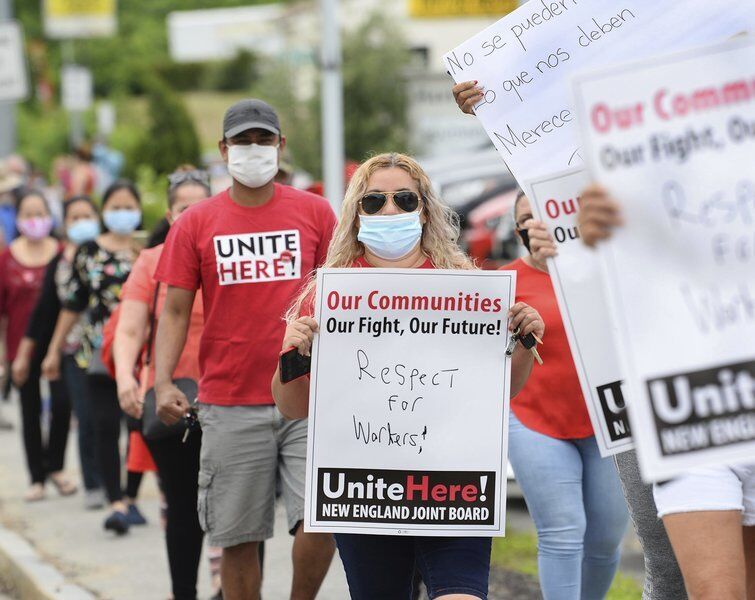 File photoSouthwick workers march with signs and chant outside the factory in protest of Brooks Brothers not giving them severance or health care coverage after the company filed for bankruptcy.

File photoMariara Garcia of Lawrence uses a high-tech binder machine to make suits at the Southwick factory when it was operating.

File photoSouthwick workers march with signs and chant outside the factory in protest of Brooks Brothers not giving them severance or health care coverage after the company filed for bankruptcy.

Time is running out to save the Southwick factory in Haverhill — and the jobs of 413 workers there who committed their efforts to the Brooks Brothers company.

According to court documents, Thursday is the deadline to submit bids to purchase the Brooks Brothers company, which filed for Chapter 11 bankruptcy protection on July 8.

The Southwick factory in Haverhill is part of the international Brooks Brothers men's clothing-manufacturing and sales operation. The future of Southwick's 413 workers is in limbo because Brooks Brothers has filed for bankruptcy.

This week, legal maneuverings began over the future of Southwick and Brooks Brothers.

On Monday, a bankruptcy court in Delaware gave preliminary approval to a bid by SPARC Group LLC for $305 million, according to a Brooks Brothers company spokesperson. Under that proposal, SPARC would buy the global business rights to Brooks Brothers, acquiring at least 125 retail stores. A hearing in the bankruptcy court for possible approval of the sale is set for Aug. 14, the spokesperson said.

The SPARC deal does not, however, include the sale of the Southwick factory in Haverhill, which is one of three Brooks Brothers manufacturing locations nationwide. Other factories are in North Carolina and New York.

According to court documents, Brooks Brothers has tried unsuccessfully to find a buyer for its entire operation since 2019. Once the decision to close the Southwick factory in Haverhill was made public, multiple written offers were submitted to purchase just the factory, according to the court documents.

An offer to buy the Southwick factory — a proposal from the Boston-based Eastern Real Estate company to pay $14 million — has, so far, been the "highest and best offer" for the property, according to court paperwork dated July 21. On June 17, Eastern Real Estate made a deposit of $100,000 for the factory and the 21 acres it sits on in Haverhill's Broadway Business Park.

Other interested parties are able to submit bids for the Southwick property, but must do so by Aug. 6, court documents said.

The bankruptcy court is being asked to approve Eastern Real Estate's bid by Aug. 17.

Should a buyer wanting to purchasing all Brooks Brothers business and manufacturing rights as a package make an offer that is higher than the SPARC Group's $305 million, Eastern Real Estate's effort to buy just the Southwick property would be nullified.

Ethan Snow, chief of staff for the New England Joint Board of the UNITE HERE union, which represents Southwick's laid-off workers, said the employees are holding out hope for a factory buyer.

"This is a factory that someone could run and operate," Snow said of the 148,000-square-foot space that formerly housed a Lowe's home improvement store. "The skills that our members have mean something. There's work that needs to be done and we have to value that work. People need PPE. If you need masks, they're back-ordered from China, but here's an alternative to put your neighbors back to work."

When the COVID-19 pandemic hit, workers at Southwick transitioned from making high-end menswear for Brooks Brothers to creating masks and other personal protective equipment, much of which was distributed locally.

At the time, Brooks Brothers CEO Claudio Del Vecchio said he hoped the factory would make 150,000 masks per day for those in need.

Now, the company says the COVID-19 pandemic contributed to its downfall.

"(They) sought to continue manufacturing operations by producing face masks for front line workers and consumers but were unable to receive the necessary government financing or otherwise generate sufficient revenue to continue to support such operation," a bankruptcy court document reads.

About 10 Southwick workers remain at the factory and will continue working at least until Aug. 15, completing "limited wind-down activities to convert work-in-progress into finished goods," the company said.

Snow said employees who remain at the factory are mostly in the maintenance and shipping departments. Workers in North Carolina and New York are also working until Aug. 15, the company said.

As the Southwick employees await news of a potential buyer, they remain buoyed by small victories.

Last week, a union complaint that was escalated to Attorney General Maura Healey's office was responded to by Brooks Brothers within 24 hours, Snow said.

That complaint involved the payment of employees' accrued vacation and sick time, which workers union spokesman Snow said the company declined to make during a July 7 negotiation. Snow said that is a violation of labor law, which is why he enlisted the help of Healey's office.

On July 24, the union was notified that Brooks Brothers would pay out the vacation and sick time for employees — and also extend their health care through Aug. 31.

Healey and Haverhill Mayor James Fiorentini continue to pursue legal action to collect tax credit money, or tax breaks, from Southwick. Those breaks were given to the company when it moved to Haverhill from Lawrence several years ago.

In exchange for promising to create 70 new jobs between 2016 and 2018, Southwick was given $2.1 million in tax breaks by the state Economic Assistance Coordinating Council. The company was also expected to retain 468 jobs as part of the agreement.

Fiorentini said last week that the city intends to file its own claim in bankruptcy court in Delaware to "claw back" the local tax credits given to Southwick.

The Southwick employees remain committed to fighting for the severance pay they say is being denied them, their union said.

"This company is using bankruptcy as a way to hide. They're not going out of business. They'll live on under new ownership," Snow said of Brooks Brothers. "They have the money to do this — and had it before they filed for bankruptcy. They gave almost $2 million in June to 17 upper management employees.

"The other piece that really sours everyone is that the company is owned by the DelVecchio family — the richest family in Italy and 50th richest family in the world," Snow said. "For them, it would just be a flick of their wrist to get people the severance and respect they deserve."