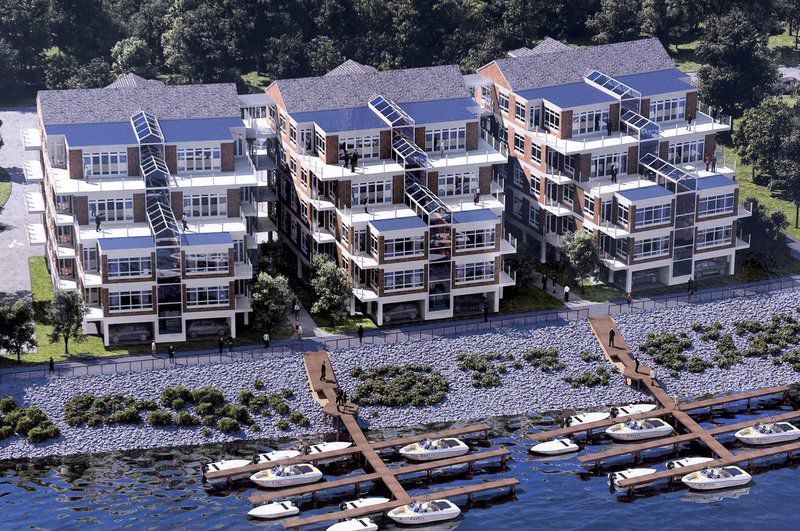 TIM JEAN/Staff photoAn artist's rendering shows the condominiums and boat docks proposed for the lot on Railroad Street in Bradford. 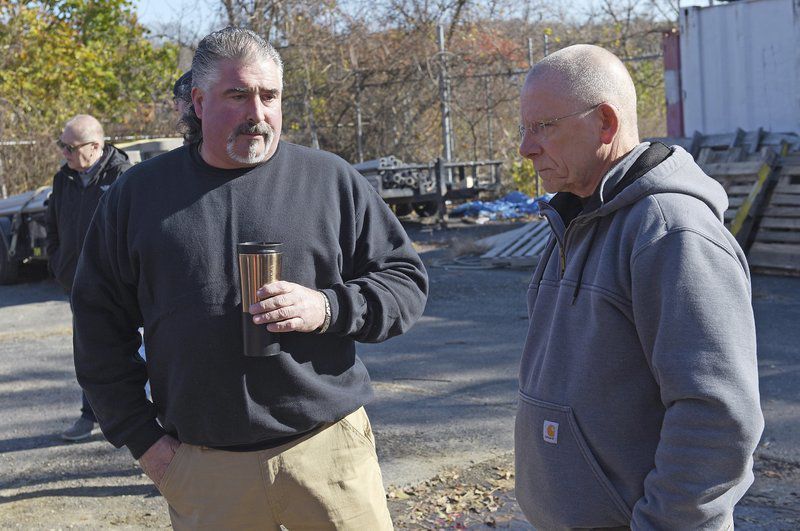 TIM JEAN/Staff photoAn artist's rendering shows the condominiums and boat docks proposed for the lot on Railroad Street in Bradford.

Ernie Cioto, who owns the riverfront property at 38 Railroad St., was joined by his attorney, Paul Magliocchetti, and architect John Sava at the morning gathering where they explained to skeptical neighbors what they wanted to do on the site.

The plan calls for three, 55-foot tall buildings, with 18 condos in each one, with a riverwalk/rail trail located between the back of the buildings and the Merrimack River. The property is 1.4 acres and is currently occupied by an unused bakery building, formerly run by Cioto and his family.

The neighbors wanted to know about the traffic on their narrow street, how cars would get in and out of the property and where cars would be parked if the on-site parking lot fills up.

“Where will parking be?” asked Leslie Gould, who lives at 38 So. Charles St., directly across from what will become the main entry/exit point for the new complex. Developers said parking will be along the front of the property adjacent to Railroad Street.

Magliocchetti said the parking requirements for the project are one space for every one-bedroom condo and 1.5 spaces for every two-bedroom unit. Gould countered that most families have at least two cars.

Magliocchetti said people will have to ride bikes or walk, which is why the project is tied into the city’s rail trail.

If there is overflow, he said, residents of the new development will have to find someplace else to park, which concerned Gould, who currently parks on the street herself sometimes.

Her husband, William Gould, said he was concerned about an additional 400 cars a day coming to and going from the site, not to mention construction vehicles lumbering past while the project is being built.

“All these people are going to be going straight into my house,” he said, noting that the driveway leaving the property faces his home, which is on the corner of Railroad and South Charles streets. “It’s like a ramp aimed at my house.”

Gould later told a reporter that he feels let down by the city because it passed a zoning overlay district five years ago that allows for large residential buildings along the river without a special permit.

The only requirement is that the City Council give the project site plan approval, which is usually given if the project meets all the criteria and receives approval from other boards and commissions.

According to the developer and his attorney, the property does meet all the regulations in the zoning bylaws.

City Councilor William Macek, who also attended the Saturday meeting, noted: “If they are complying, we have no leg to stand on” to reject the project.

If the council rejects the project, the developer would likely appeal, and if he won, then neither the city nor the neighbors would have any say on how the project is built.

City Councilor Tim Jordan said the best option is for neighbors and the developers “to work something out. The issue is, if we don’t approve they’ll go to court and win. Can we get something palatable to everybody, instead of shooting it down and then losing in court?”

Gould said he and the other neighbors never understood or were told about the implications of the zoning overlay district that allows construction of enormous buildings in residential zones along the river.

“We never even knew about it,” he said, adding that he only found out the property had been rezoned when the 54-condo project was proposed.

“We’ve lived in that house for 50 years,” he said, adding that he had hoped to pass it down to his son, William Gould Jr. Now he’s not sure what he’s going to do.

The developer, Cioto, who is well-known by the neighbors for having run a bakery in that location for many years, said he hoped to come to some kind of agreement with the neighbors, although he and his attorney both said something similar to their project would eventually be built there.

“I’m not here to make a commotion,” Cioto said. “I want to work with everybody. I don’t want to make enemies, I want to make friends.”