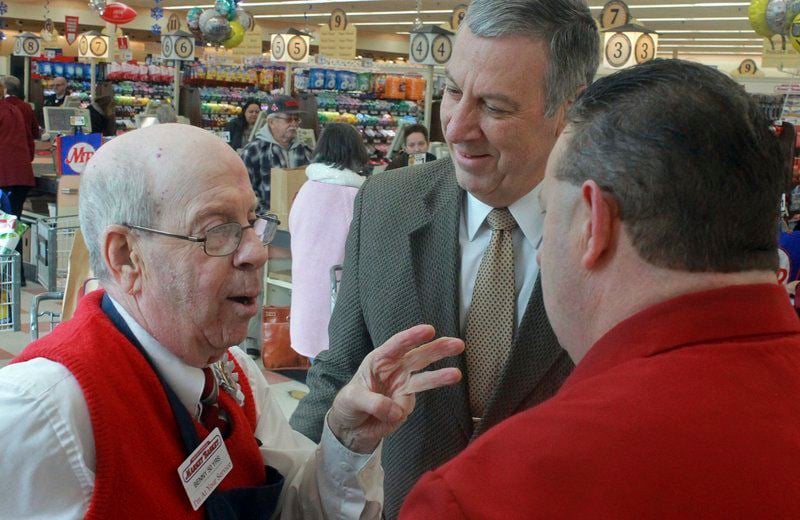 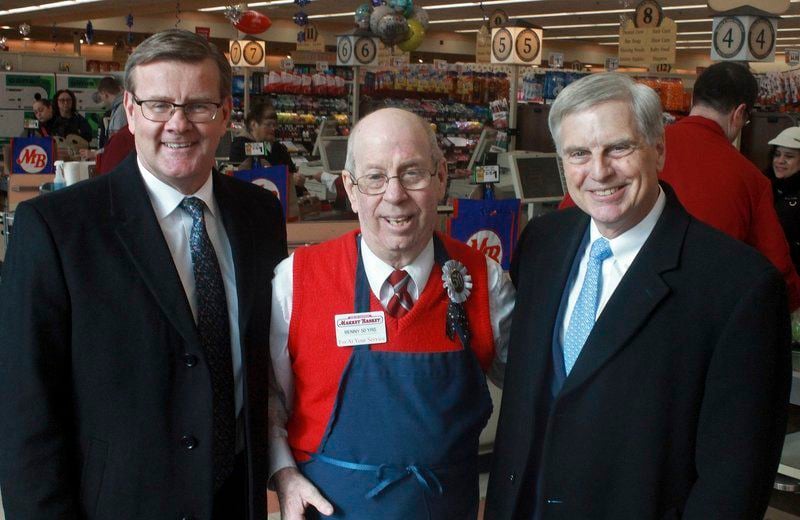 MIKE LABELLA/Staff photoVisiting with Bennett Merker, center, on his last day on the job at the Central Plaza Market Basket are, from left, David McLean, operations manager for Market Basket, and Jay Rainville, advertising director for the company.

MIKE LABELLA/Staff photoVisiting with Bennett Merker, center, on his last day on the job at the Central Plaza Market Basket are, from left, David McLean, operations manager for Market Basket, and Jay Rainville, advertising director for the company.

Customers of the Market Basket in Central Plaza got to know Bennett Merker in the few short months he's been working there.

They quickly came to enjoy his jovial banter and smiling face, just as customers at the Westgate Plaza and RiversEdge Plaza Market Baskets have enjoyed his presence over the past 50 years, while he worked at those stores.

A fixture in Haverhill's Market Basket community, Merker is retiring after nearly 51 years of service to the company. His 51st anniversary would have been Feb. 15.

Those other things, Merker said, include candlepin bowling at Academy Lanes.

"I'm in a league of people with special needs and I love it," Merker said. "I'm also an avid reader and I love music."

Meryl Madell of Shutesbury said her cousin, Bennett "Benny" Merker grew up in Haverhill and when he was a toddler, he contracted the measles. She said that condition developed into encephalitis, which resulted in permanent brain damage and a weakening of the right side of his body.

Merker will tell you that he almost died.

"The doctors saved my life," he said.

His disability didn't stop him from going to school and later obtaining a job at Market Basket in Central Plaza as a grocery bagger.

He soon became a model employee.

"Benny taught me how to bag," said Ken Naudzunas, manager of the Central Plaza Market Basket and a member of Haverhill High School's Class of 1979. "Benny was telling me the other day how we started with paper bags years ago, switched to plastic and now we're back to paper."

When he was in his 20s, Merker became the first special needs Boy Scout in the United States to earn his Eagle Badge, blazing a trail for others with disabilities.

Over the years, Merker moved from one Market Basket to another in the city. His last long-term stint was at the Market Basket in Westgate Plaza, where he walked to work every day from his apartment at the nearby Hadley West complex, where he lived independently. This past summer, he moved to Merrivista on Water Street and shifted his work to the Central Plaza store, which is within easy walking distance for Merker.

Merker's last day at work was Monday, Jan. 6, and Naudzunas made it a day to remember.

It began with a visit from Market Basket CEO, Arthur T. DeMoulas, followed by visits by the company's operations manager, David McLean, and advertising director Jay Rainville, who both presented Merker with a bag of gifts.

Merker enjoyed chatting with them all, but his attention quickly turned back to his job as a bagger, something Merker has taken seriously since day one. This day was no different than any other, as Merker's attention was on serving his customers to the best of his ability.

"He knows everyone by name," said Lisa Smith, a cashier at the Westgate Plaza Market Basket who dropped by Central Plaza along with fellow cashier Allison Johnston to wish Merker a happy retirement.

"He's grumpy but lovable," Johnston said, noting that Merker always showed up for work. "And he always arrived early to have a doughnut or muffin and a cup of coffee before starting his day. We're all going to miss him."

"He was here during the big blizzard a few months ago," said Merker's supervisor, Ryan Rastello. "I can't remember a day when he didn't show up for work."

Unknown to Merker, Naudzunas had planned to hold a party in the store's back room and had invited Merker's former store managers and other employees.

They all celebrated with a big sheet cake, sandwiches and drinks.

"I want everyone to have some cake as I'm not taking it home," Merker told the crowd.