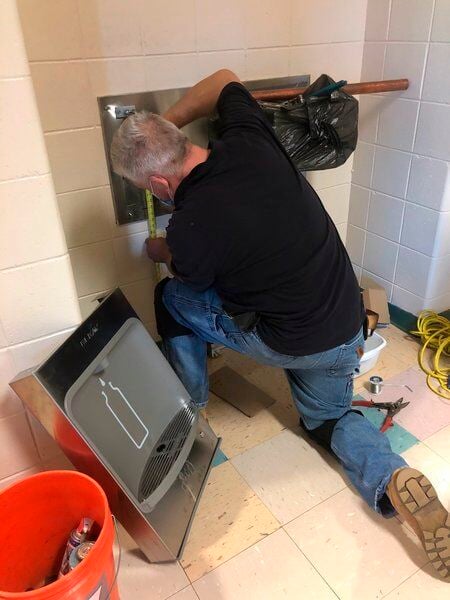 Courtesy photoA technician installs a water filler at Nettle Middle School so that students can use their own refillable water bottles to drink from when classes resume in mid-September. 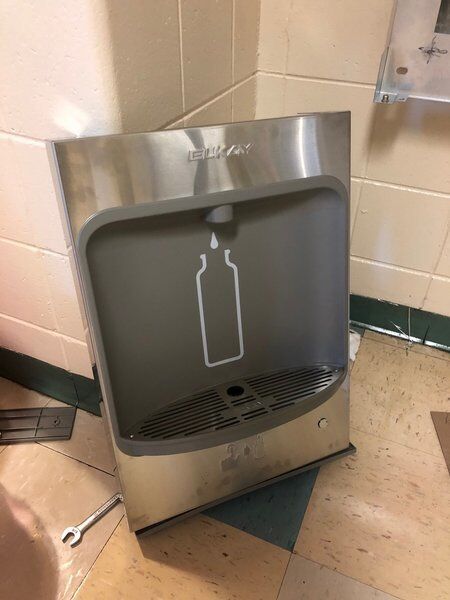 Courtesy photoNew water fillers are being installed in all Haverhill public school buildings to replace the previous water bubblers. This water filler was installed at Nettle Middle School earlier this week.

Courtesy photoA technician installs a water filler at Nettle Middle School so that students can use their own refillable water bottles to drink from when classes resume in mid-September.

Courtesy photoNew water fillers are being installed in all Haverhill public school buildings to replace the previous water bubblers. This water filler was installed at Nettle Middle School earlier this week.

As the school year approaches in Haverhill, many issues of great impact are on the way to being resolved: Families are choosing their preferred learning model, busing routes are being finalized and Chromebooks are being distributed.

Now, smaller day-to-day concerns inside the buildings are gaining the attention of school officials.

The School Department has begun work to replace traditional water bubblers in each school building with new water bottle filling stations. Mayor James Fiorentini said all bubblers will be replaced but there is a delay due to a lack of availability of materials. He said all water stations that are needed have been ordered.

"There is an issue with supply as there aren't enough out there," the mayor said about the new water stations. "Once they are available we plan to replace them all (the bubblers)."

As to why they weren't replaced before the pandemic, the mayor said the old bubblers were considered safe, but that due to COVID-19, changes have become necessary. He said money to replace bubblers will come from the CARES Act.

The Coronavirus Aid, Relief, and Economic Security (CARES) Act was passed by President Trump in March to help local governments cover expenses incurred during the pandemic. Elsewhere in Haverhill, Fiorentini has made sure places like food pantries, social service agencies and housing initiatives received a share of the federal money.

The mayor said the new water stations are safer because they keep people from having to lean over a bubbler to capture water in their mouth. That eliminates the possibility of someone's mouth coming into contact with the bubbler.

Fiorentini said the city has also hired a company to conduct air flow and air quality checks of every room in every school building and that each room will receive a certification from the company.

"Our biggest priory is making sure every window is open and all have screens, and that all HVAC systems are cleaned and filters are replaced," the mayor said.

"And we'll put a sticker as you enter each room,'' he said. "Part of this is making certain rooms are up to date and part is reassuring parents and teachers we're working hard on this.''

The mayor said air quality has long been a concern, and that he recalls visiting classrooms with former Superintendent James Scully to check on air quality.

"At City Hall, we hired a vendor to check all of our filters and replace them, and they placed us on a regular maintenance schedule," Fiorentini said. "I'm not happy with what I hear about the school maintenance department and if schools aren't doing that, they need to."

Teachers were scheduled to report to work this week. Most students will learn remotely until Oct. 5, after a two-week delay in the return to classrooms under the hybrid learning model. That model calls for most students to be in classrooms two days per week and learn remotely online from home the other three days.

According to Superintendent Margaret Marotta, 70% of families surveyed want hybrid learning for their children, while 30% are sending their children back to school on a fully remote basis.

Other improvements are also happening around the district before students return to school.

"We've been checking in with the building leaders to make sure they have plans in place for drop-off and pick-up and recess," Marotta said. "Parents will receive an application for a bus pass, which we haven't had in the past. Kids are going to adhere to the School Committee's busing policy for contract tracing reasons."

According to the mayor's office, new fencing has been installed at Walnut Square Elementary School to enclose the playground and repairs have been made to the steps there.

Painting has also been done at buildings, including Whittier Elementary School. In addition to work done earlier this summer by the district's facilities department, a crew from the Essex County Pre-release and Re-entry Center, also known as The Farm, in Lawrence, has been onsite repainting the walls of eight classrooms that were in need of a freshening up.