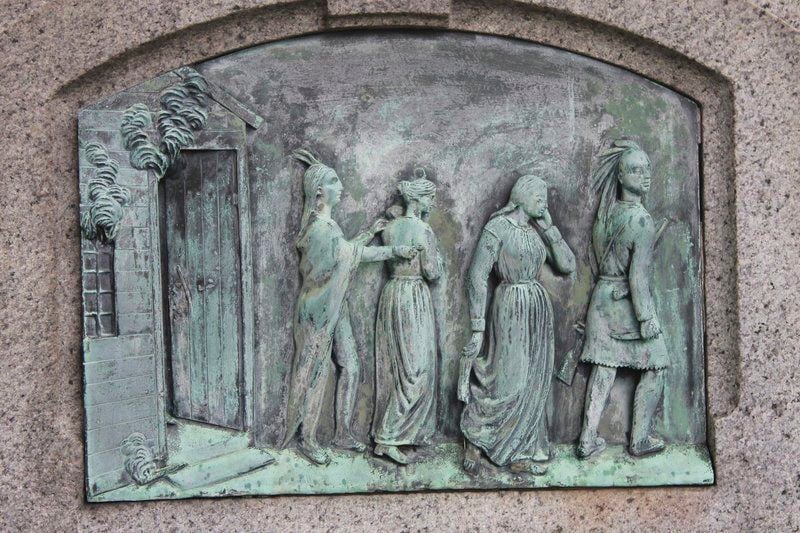 MIKE LABELLA/Staff photosThis image at the base of the Hannah Duston statue in GAR Park depicts Hannah Duston’s capture by Native Americans. 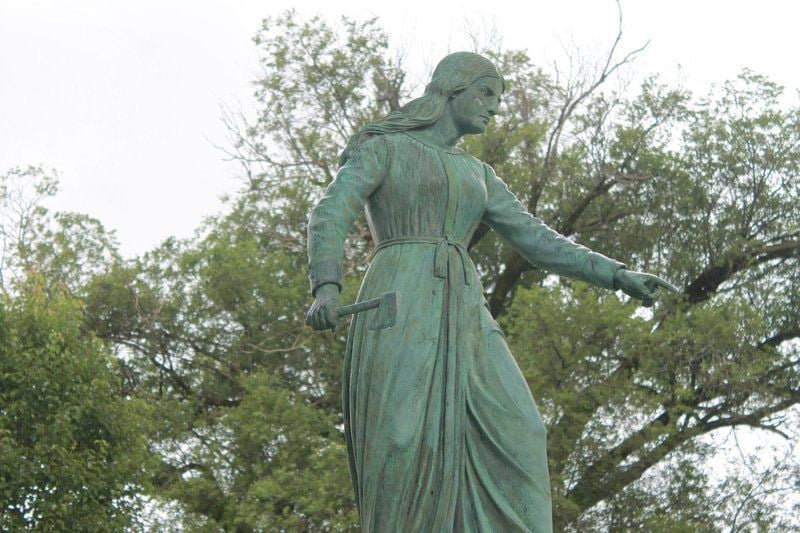 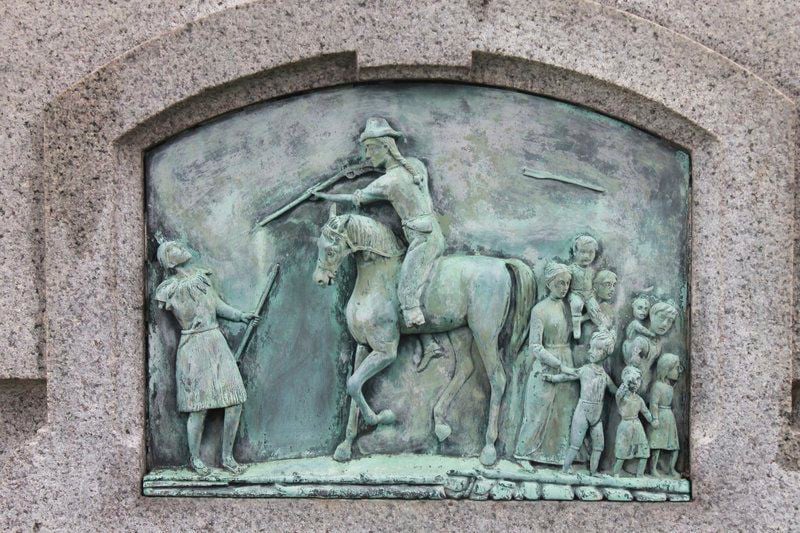 This image at the base of the Hannah Duston statue in GAR Park depicts Hannah Duston’s husband, Thomas Duston, defending his children against the pursuit of “savages.”

MIKE LABELLA/Staff photosThis image at the base of the Hannah Duston statue in GAR Park depicts Hannah Duston’s capture by Native Americans.

This image at the base of the Hannah Duston statue in GAR Park depicts Hannah Duston’s husband, Thomas Duston, defending his children against the pursuit of “savages.”

As monuments across the nation are being toppled by angry protesters, a Haverhill woman is looking to have the city’s Hannah Duston monument in GAR Park moved to a less public location, where it could be displayed in a more historical context.

Judy Matthews asked the City Council recently to consider relocating the statue of Colonial woman Hannah Duston, saying it is offensive to Native Americans and that it glorifies revenge.

“It’s a racist depiction of what may or may not have actually happened in 1697 to people who were caught up in King William’s War,” Matthews said. “It’s a bloodthirsty revenge fantasy and it’s inappropriate.”

While sympathizing with Matthews, the council sidestepped the issue, with several members indicating the city has more pressing issues to deal with.

The controversial issue erupted on social media with petitions surfacing on the website change.org both in support of and against removing the Hannah Duston statue.

Matthews said the recent wave of protests against statues and monuments reflect “mounting public outrage over historical symbols of the white supremacy and racism that has devastated the lives of Native Americans as well as Black Americans.”

The statue of Duston wielding an ax is offensive to Native Americans, Matthews told the council, noting the words “pursued by savages” are engraved on its base.

“How would you explain that language to a Native American child?” she asked.

Matthews reached out to the Massachusetts Center for Native American Awareness, which responded saying the organization believes that Duston’s statue is harmful to the community due to its “perpetuation of racist stereotypes and beliefs and its presence as a symbol that continues to illustrate the structural racism that has been a foundation of the United States since its founding.”

Councilor Timothy Jordan, who invited Matthews to address the council, said he does not share the same feelings as Matthews, but acknowledged the issues surrounding the statue “are at the very least, debatable.” Both he and Councilor Mary Ellen Daly O’Brien said the city is facing more pressing issues “at this time.”

O’Brien suggested people read “Massacre on the Merrimack,” a book by Jay Atkinson about Hannah Duston’s history, and said people cannot fix what happened to indigenous peoples centuries ago during the time of America’s settlement by Europeans.

Councilor Michael McGonagle said he’s sensitive to Native Americans who are offended by the statue, but also pointed to Duston’s story, saying that for any young woman who was abused, he would “want them to have the will to be able to survive.” He said he was not celebrating Duston’s story, but called it a symbol of “perseverance and survival.”

Council President Melinda Barrett said that although Hannah Duston was used in her time as a symbol of a “brave frontierswoman” and her story was later used to defend westward expansion, Matthews’ request could lead to future discussions about how Hannah Duston is depicted.

“I could see a compromise where the statue stays but the depictions of the Native Americans are covered or there is a counter-explanation,” she said.

On March 15, 1697, Duston — or Dustin as it's sometimes spelled — and her nursemaid, Mary Neff, were captured in a raid on Haverhill near the end of King William’s War, a conflict among English colonists, French colonists and their Native American allies.

Duston was taken north to an encampment on an island in the Merrimack River in present-day Boscawen, New Hampshire. Along the way, the captors killed Duston’s 6-day-old daughter, according to historians, by dashing the baby’s head against a tree.

According to some contested accounts, after being told that she and her other captives would be “stripped, scourged and made to run a gauntlet while naked” once they arrived at another camp, Duston led an early morning revolt against her captors as they slept.

Using a small ax, or possibly a club, Duston, Neff and an English boy named Samuel Leddardson killed their captors, taking their scalps as proof of their ordeal. They scuttled the natives’ canoes, except for one, then traveled down the Merrimack River, landing in Haverhill where Merrimack River Park is today along Route 110. A stone marker designates the place of her landing.

Historical actress, museum educator and a descendant of Duston, Jennifer Emerson of Salem, Massachusetts, portrays her eighth great-aunt during presentations to school children and others, relaying the details of the raid that changed the course of Duston’s life.

“As it was explained to me, the statue of Hannah Duston was erected to celebrate the strength of Colonial women,” Emerson said.

Emerson said there are many questions still to be asked about Duston’s place in history and the statue that honors her.

“Regardless of whether the statue stays or is moved to a more educational venue where it will be presented in a much more objective way, my hope is that Haverhill will erect a memorial to Native Americans, of their design and choosing,” Emerson said. “Let’s build a better world than our ancestors lived in ... let’s build an anti-racist world.”