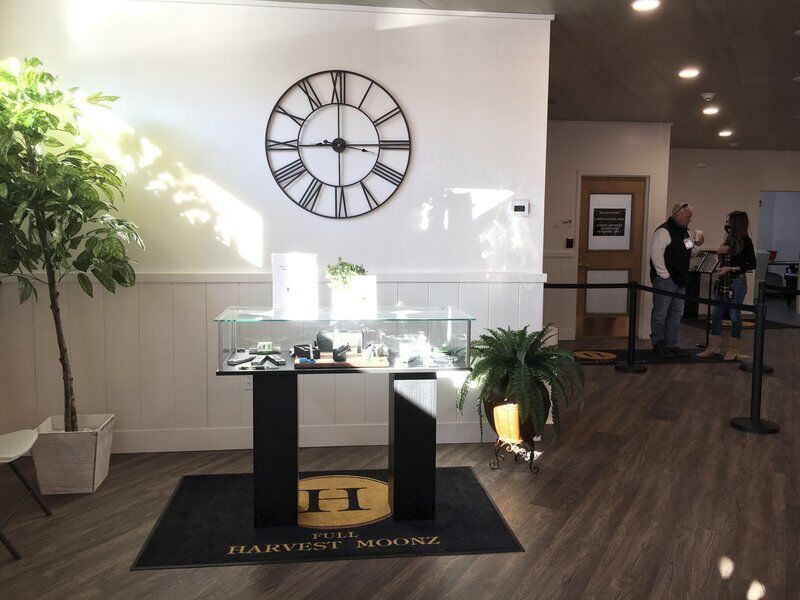 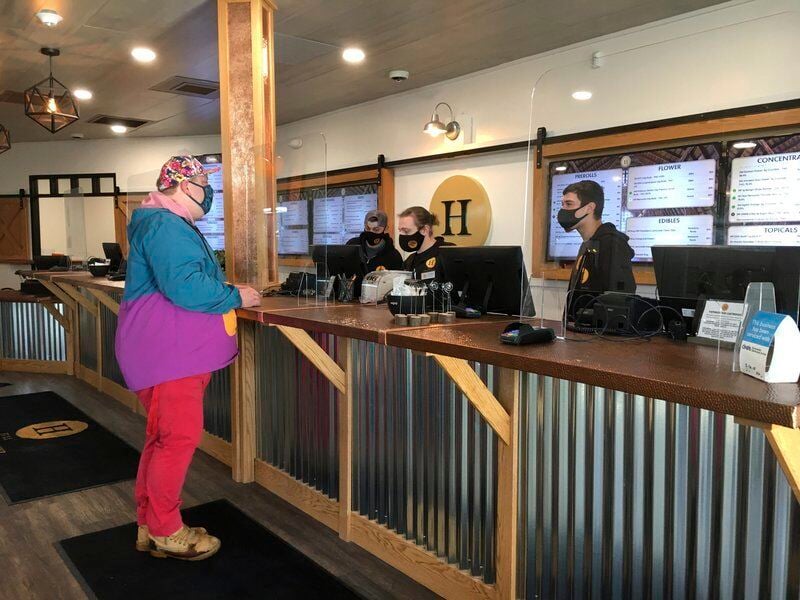 Haverhill’s third retail marijuana shop has opened, this one at the Plaistow line.

The shop, called Full Harvest Moonz, 95 Plaistow Road, welcomed its first customer Wednesday of last week, nearly two years after receiving a special permit from the City Council to do business in Haverhill.

The first customer was Cameron Palczynski, who purchased pre-rolled marijuana cigarettes and gummies after a brief consultation with Johnny Simon, the shop’s assistant general manager.

“It’s finally here — this was a long time coming,” shop owner Janet Kupris said after opening the doors of the shop.

Kurpris and her business partner Michaela Ristuccia say Full Harvest Moonz plans to be a good neighbor and a welcome addition to the city.

“The impact I see is that extra funds (will be coming) for the city that they didn’t count on before,” Kupris said of Haverhill getting a cut of sales according to a host community agreement, plus property taxes the shop must pay to the city. “Businesses have gone out of business because of COVID, so hopefully we (marijuana shops) are all going to be picking up the slack and helping in that regard.”

Full Harvest Moonz was the first cannabis dispensary to receive a special permit from the City Council — that approval coming in June 2019. Kupris, who lives in Weymouth, received the permit after a 7-1 vote. Councilor Joseph Bevilacqua was the lone dissenting vote, while Councilor Michael McGonagle abstained due to a conflict of interest. Until late January, McGonagle was landlord of the former Seafood Etc. restaurant building on Amesbury Road where a local group known as Mellow Fellows plans to open a cannabis shop. McGonagle sold the property for $1.35 million on Jan. 20.

Since Kupris received the special permit for her shop from the City Council, she has been joined by Ristuccia, who serves as company president of Full Harvest Moonz.

Ristuccia said she hopes local people are attracted to Full Harvest Moonz by the background she and Kupris share of appreciating the healing and holistic properties of cannabis.

“We both believe cannabis is a healing tool and we’re really excited to bring those spiritual, holistic elements into the space,” Ristuccia said.

Customers must have appointments to be allowed to shop at Full Harvest Moonz. Twelve appointments are available per hour, Kupris said. Appointments may be made online at the shop’s website, fullharvestmoonz.com, where shoppers 21 and older are also able to reserve purchases for pick up in the shop.

Since the shop is located on the New Hampshire border, strict regulations are enforced by Full Harvest Moonz security when customers are navigating the parking lot. Ristuccia said 24 spaces are available for customers in a lot shared by the Chipotle restaurant. There are two ways to enter the lot, but only one way to exit, and traffic behind the building is restricted to one-way access because of New Hampshire drug laws, she said.

Signs and markings in the parking lot help to guide drivers and a map is available in the store’s vestibule as customers exit the building.

Two other retail marijuana shops are open in Haverhill. In May 2020, a shop named Stem at 124 Washington St., was the first to open in the city. Stem and Full Harvest Moonz are both female-owned shops. The second shop to open in Haverhill was CNA Stores at 558 River St., which began operating in November.

The City Council has also granted a permit to the Mellow Fellows shop to open on Amesbury Road, but that business is waiting for its final state license approval.

Up to six marijuana shop licenses may be granted in Haverhill. According to state law, a community can cap the number of licenses based on a percentage of the number of package stores it has.

Exeter - Michael Scott "Mike" Bartley, 56, of Exeter NH died unexpectedly at home on January 11th. Mike attended high school in Haverhill, and Salisbury, and joined the local army national guard for a short time after high school. Mike will be fondly remembered for his quick wit, sparkling b…