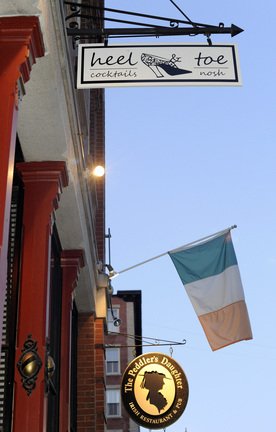 TIM JEAN/Staff photo A “speakeasy” type restaurant, the Heel and Toe, has opened above the Peddler’s Daughter on Wingate Street. 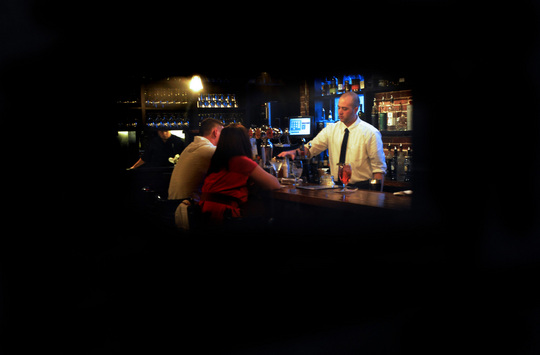 TIM JEAN/Staff photo Peeking through a small opening on the front door of the new “speakeasy” type restaurant Heel and Toe, Ryan Garrigan serves drinks to customers at the bar.

TIM JEAN/Staff photo A “speakeasy” type restaurant, the Heel and Toe, has opened above the Peddler’s Daughter on Wingate Street.

TIM JEAN/Staff photo Peeking through a small opening on the front door of the new “speakeasy” type restaurant Heel and Toe, Ryan Garrigan serves drinks to customers at the bar.

One of the hottest new restaurant concepts has come to Haverhill, and has roots in a well-remembered time in the country's history.

Heel and Toe is a new restaurant based on the historic speakeasy restaurants of the 1920s which illegally sold alcohol beverages during Prohibition. While it is, of course, legal for the Heel and Toe to sell alcohol, its workers intend to have some fun with their customers.

"We have a board hung up inside the restaurant which lists the house rules, which would have made more sense back then," said owner Michael Conneely.

Rules on the board include no spitting on the floor, not borrowing more than one cigarette from the same person and no sleeping on the bar.

The name Heel and Toe is a reference to both the history of Haverhill as well as Prohibition. Heel and Toe was a phrase shouted by bartenders to patrons of the bars warning the drinkers to flee whenever the cops showed up. It also pays respect to Haverhill being one of the top shoe-making communities in the country around the time of Prohibition.

Conneely said the drinks that will be served at the Heel and Toe will be similar to ones that were popular almost 100 years ago.

"We have a lot of craft cocktails," he said. "We have a tea-infused whiskey, and we are also making our own ice cubes from scratch."

"We have completely renovated the place," Conneely said of the Heel and Toe. "We turned it into a really nice atmosphere."

The restaurant serves many small shared dishes, along with comfort American food.

Conneely and his business partner Ryan Garrigan modeled the Heel and Toe after Please Don't Tell, one of the first speakeasy restaurants in the country.

"These restaurants are really popping up all over the place," Conneely said. "It's one of the hottest concepts in the country."

Join the discussion. To comment on stories and see what others are saying, log on to hgazette.com.