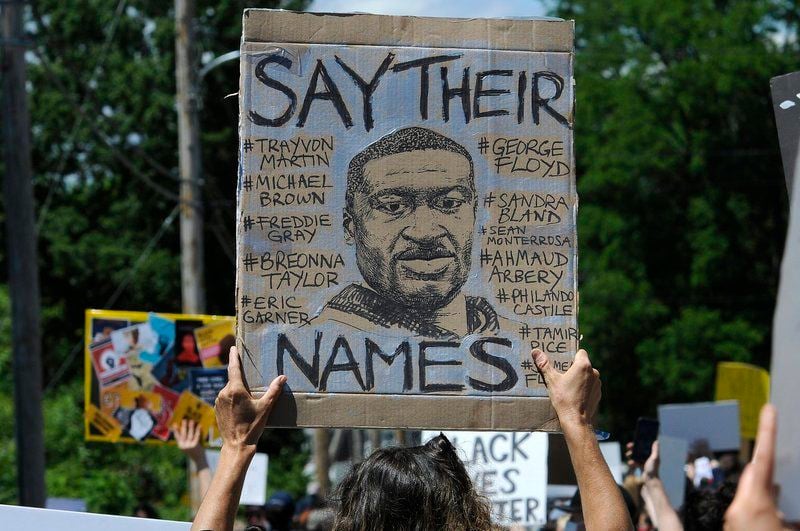 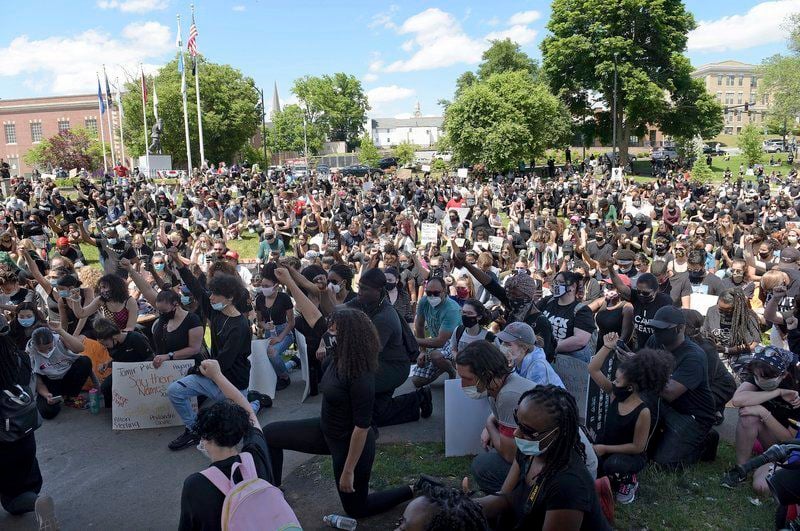 TIM JEAN/Staff photoHundreds of people take a knee for a period of silence in memory of George Floyd during a Black Lives Matter protest and march in Haverhill. The rally started outside of the stadium on Lincoln Avenue, followed by a march to GAR Park. 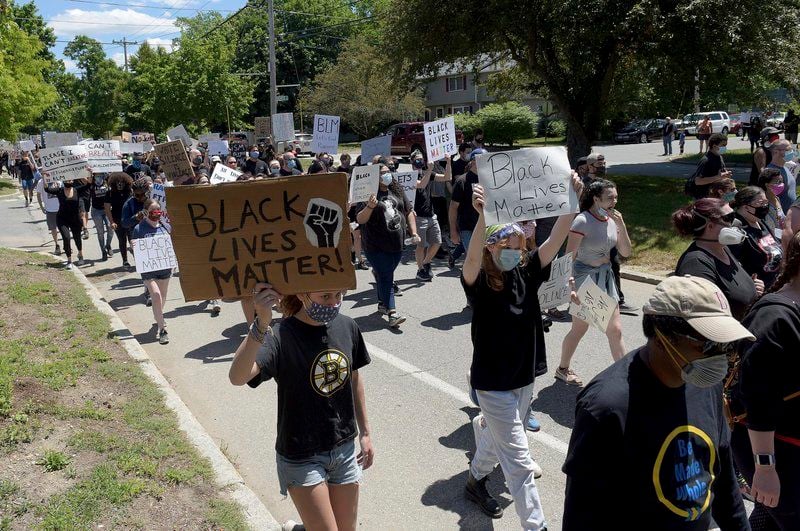 Hundreds of protesters march along Lincoln Avenue chanting and carrying signs during a Black Lives Matter protest and march in Haverhill.

TIM JEAN/Staff photoHundreds of people take a knee for a period of silence in memory of George Floyd during a Black Lives Matter protest and march in Haverhill. The rally started outside of the stadium on Lincoln Avenue, followed by a march to GAR Park.

Hundreds of protesters march along Lincoln Avenue chanting and carrying signs during a Black Lives Matter protest and march in Haverhill.

The kind of protests that have been happening across the nation hit home last weekend, as hundreds of people participated in a Black Lives Matter march along the river and into the center of Haverhill.

The two-mile march on Saturday began at the stadium on Lincoln Avenue and culminated with a huge gathering at GAR Park, across from the public library.

Three Haverhill High School students — Alice Marvin, 16, Ambi Mayhew, 16, and Gretchen Fieldhouse, 14 — organized the event and warned participants against acting up in any way, saying that if they did, they would be asked to leave.

“We’re protesting not just for George Floyd,” Mayhew said. “There’s other lives who have been affected by police brutality and killings by police. He was the tipping point ... he was the one to show everyone that enough is enough and it’s time to make a change.”

Many people carried signs with messages such as “white silence is compliance” and “racism is not born, it is taught” and “I can’t breathe,” a statement referencing the pleas of Floyd that were caught on camera as a Minneapolis police officer held his knee against Floyd's neck, killing him.

Floyd died after being restrained by Minneapolis police officers on May 25.

John Brayton, 46, was one of many in the crowd at the Haverhill protest. He held a sign with the message “Black Lives Matter.”

Everyone who marched wore masks and those who did not want to be part of the crowd were invited to participate in a car parade.

Marvin, Mayhew and Fieldhouse led a series of chants, including “no justice, no peace” and “hands up, don’t shoot.”

The Rev. Kenneth Young, pastor of Calvary Baptist Church in Haverhill, stepped the crowd through a brief history of life in America as a person of color.

“While other people have fought for equality, we’re still fighting for civil rights,” Young said. “As we live in this pandemic, we are disproportionately being affected by this coronavirus. So many blacks have uttered the same words of George Floyd and Eric Garner: ‘I can’t breathe!’”

Haverhill police officers were stationed along the marchers' route while Police Chief Alan DeNaro and several other members of the force took part in the march.

The crowd at GAR Park was estimated to be nearly 1,000 people.

Marvin told the crowd not to be afraid to call out racist comments by others and to “fight racism every single day.”

Alexis Galloway, 18, a 2019 Haverhill High graduate who is attending Bunker Hill Community College, said she should not have to be afraid to walk out of her home and be shot.

“I stand here for my black community, my niece and my little brother because they shouldn’t have to grow in a world like this where they always have to look behind them,” she said. “I am proud to be black. I was born black and I will die black, but I refuse to die because of the color of my skin.”

Dennis Everett of the POSE Inc. (Power of Self Education) organization of Haverhill, told the crowd that the city has a lack of diversity among its government boards and nonprofit boards, and that Haverhill needs to open up jobs to minorities.

He urged the crowd to vote out those in city government who don’t listen to minority voices.

“If the (school) superintendent does not hear you, you gather the same crowd and you bring it to her office,” he said. “It is time to strategically mobilize, but in peace.”

Vargas said there is a bill in the state House of Representatives that would adopt clear statutory limits on police use of force and abolish choke holds. He also said a bill is expected to filed in the coming weeks that would create an independent office of police standards and professional conduct, and also create a commission tasked with reforming civil service.

One of the most impassioned speakers of the day — Hannah Bessette, 20, a 2018 Haverhill High School graduate who is attending Howard University in Washington, D.C. — called for Mayor James Fiorentini to go to the stage, asking him to commit to defunding police.

The crowd chanted for the mayor, yet he was nowhere to be seen.

Fiorentini told The Eagle-Tribune that he had to leave early for a family gathering and that had he spoken, he would have said he opposes efforts to defund police.

“I think it’s misguided,” Fiorentini said. “To me, we don’t have enough police officers.”

The mayor said that the city stands united against racism and he is working to recruit minorities for city jobs.

The event concluded with an 8 minute, 46 second period of silence for Floyd and all people of color who have suffered because of police brutality, organizers said. The time period was in reference to how long a police officer pressed his knee against Floyd’s neck.

“Things went very smoothly,” Alice Marvin said following the Haverhill event. “People stayed peaceful and respectful and I hope it made a good impact on the city. I think we unified our community and that people are now aware they need to vote and make further changes.”