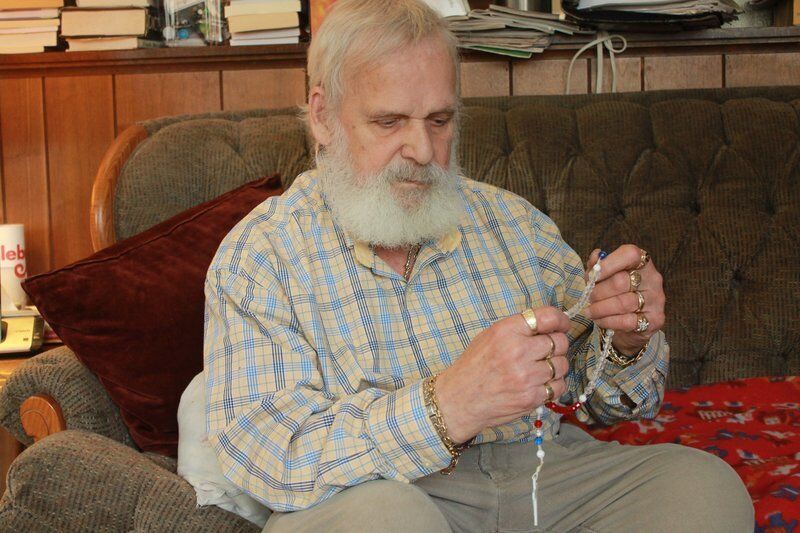 MIKE LABELLA/Staff photoWilliam LaPierre prays the rosary every day, putting his faith in God while grieving the loss of his son, who was killed in a highway crash. 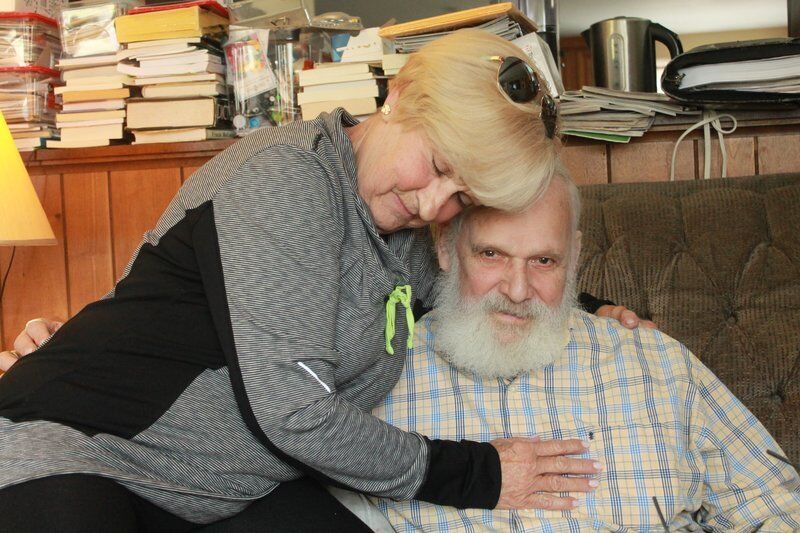 MIKE LABELLA/Staff photoCarla Peabody of Haverhill consoles longtime friend William LaPierre during a visit to his home after his son's death.

MIKE LABELLA/Staff photoWilliam LaPierre prays the rosary every day, putting his faith in God while grieving the loss of his son, who was killed in a highway crash.

MIKE LABELLA/Staff photoCarla Peabody of Haverhill consoles longtime friend William LaPierre during a visit to his home after his son's death.

The morning after learning his son was killed in a highway crash in Cocoa Beach, Florida, William LaPierre turned to social media — just as he had many times before — to seek support from people across the community.

It wasn't his typical message asking for help for the Sacred Hearts Church food pantry that LaPierre and wife Karen founded 15 years ago. Instead, he posted a Facebook message asking people to pray for his family after the death of his son William LaPierre Jr., 59, who had been living in Florida.

Several days later, the elder LaPierre resumed asking for donations for the food pantry, which has provided nourishment to thousands of people during the pandemic.

It was the second time in recent years that LaPierre, known across his hometown of Haverhill as Bill, has experienced the loss of a loved one and then turned his attention to others in need.

He said he continues serving people through the Sacred Hearts pantry to honor his wife's wishes that the pantry remain strong.

On the morning of Dec. 18, 2011, LaPierre's beloved wife was killed by a drunken driver in an incident that shocked the community. The crash happened in front of Heav'nly Donuts, 55 S. Main St., Bradford, as the LaPierres loaded packages of doughnuts for their church into the back of their car. Karen was pinned between two vehicles and died at the scene. The drunken driver's car missed hitting Bill LaPierre by inches.

For years, the LaPierres had made the Sunday morning doughnut stop, and then headed to Sacred Hearts Church to host social gatherings after the 7:30 and 9 a.m. Masses.

At the time, LaPierre turned to his faith in God and forgave the driver who took his wife's life.

"I don't feel anger and I hope she gets help," LaPierre said of the woman who has since gone to prison. "I won't waste my time hating her or being angry .... My faith tells me I have to forgive her."

LaPierre is leaning heavily on his faith again after his son Bill Jr. was killed the night of April 21 when a speeding motorcyclist crashed into a van driven by the younger LaPierre, killing them both.

The elder LaPierre said his grandson Keynen James LaPierre, 24, son of Bill LaPierre Jr., was told the motorcycle was traveling at least 120 mph at the time of the crash.

"My grandson lost his mother in 2019 to kidney failure and now he is without a father," LaPierre said with tears in his eyes.

He said Bill Jr. was a dedicated youth baseball coach for many years, a loving husband and father, and an "amazing" uncle to his nine nieces and nephews.

A former varsity football and hockey player for Haverhill High School, Bill Jr. served with the Marines and then moved to Florida in 1987. He married Ronda Coffman in 1996.

"Earlier in life, he ran a construction company and gave it up during a downturn in the economy and opened the taxi business, which Keynen will help continue to run along with Paul," Bill LaPierre said, adding that grandson Keynen graduated from college last year and teaches in Florida.

"When I think of my kids, they always look after each other," LaPierre said. "My son Bill put family above all things in his life and he was a true leader."

Late last Wednesday night, the phone rang in LaPierre's Haverhill home. He said he had a sudden feeling it was bad news.

"My first thought was, why didn't God take me?'' he said of learning his son had been killed. "I'm older and I've lived my life. Why did you take someone young whose son needed him?

"My belief in God gets me through this, and I don't try to understand why (Bill Jr. was killed)," he said. "The whole thing should not have happened."

The morning after he learned his son was killed, LaPierre used a Facebook posting to inform the community about the death and to seek prayers.

Several days later, he was back to posting a message seeking support for the food pantry. He told the community that the pantry was closed last Thursday and Friday for long-awaited renovations, including painting and new flooring. Just as he's done weekly during the pandemic, LaPierre asked for food donations to help meet the constant demand from a community still suffering effects of the pandemic.

The pantry reopened Monday. That night, LaPierre took time to attend a Mass at St. Basil's retreat center in Methuen.

"I went for support and prayer," he said.

LaPierre said his family is planning a celebration of his son's life. It will happen in May in Florida.

"One of my grandsons will sing a song and (sons) Randy and Stephen will accompany him on musical instruments," LaPierre said. "We want it to be what Keynen wants, and I told him I will give the eulogy."

Missed by Many Heartfelt Memor...

Missed by Many Heartfelt Memories Thomas Francis Ramos 2008 His friendly smile and kindness was felt by many,

At Peace We Miss You Angela Ca...

At Peace We Miss You Angela Caroline Ramos Dad and Richard