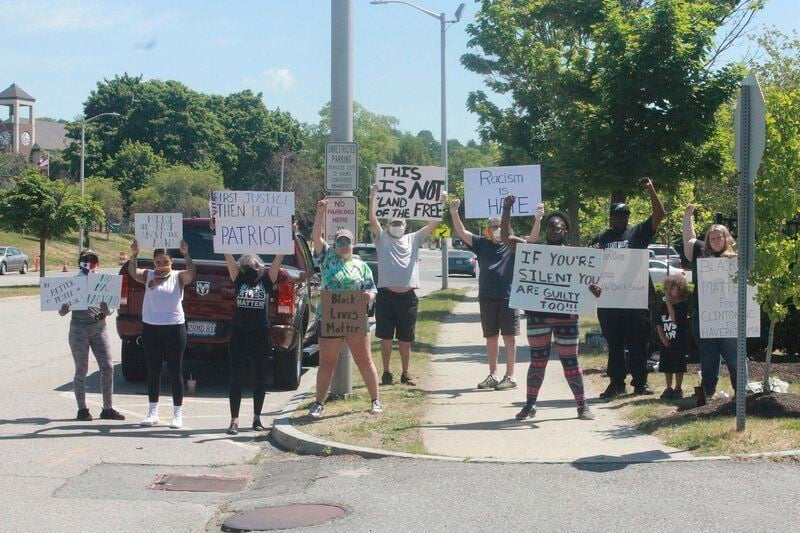 MIKE LABELLA/Staff photoProtesters stand in front of the police station in support of the Black Lives Matter movement. 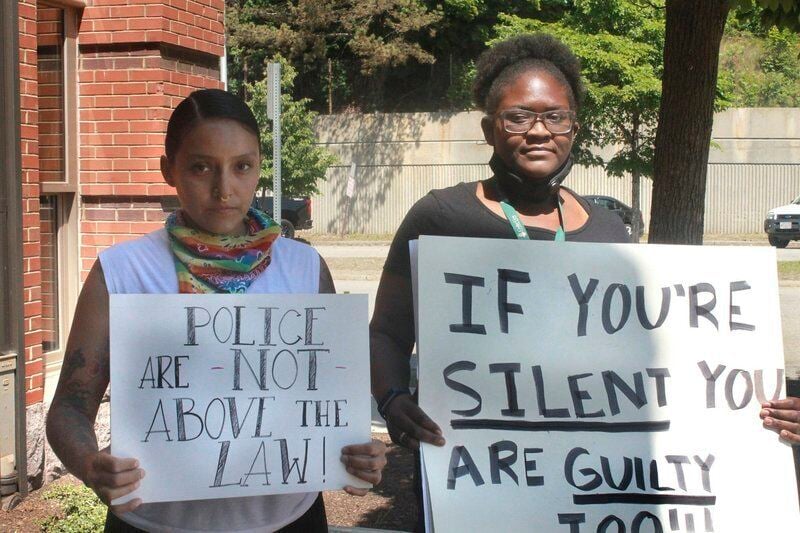 MIKE LABELLA/Staff photoFrom left, Dianne Donnelly and Gina Faustin, both of Haverhill, have been holding signs in front of the police station protesting police violence against people of color.

MIKE LABELLA/Staff photoProtesters stand in front of the police station in support of the Black Lives Matter movement.

MIKE LABELLA/Staff photoFrom left, Dianne Donnelly and Gina Faustin, both of Haverhill, have been holding signs in front of the police station protesting police violence against people of color.

As groups gather around the country to protest racism and police brutality, Haverhill is experiencing its own protest — a daily event outside the police station that will spread elsewhere in the city this week.

A protest that began May 27 with a lone woman outside the police station on Bailey Boulevard has grown to more than a dozen people who gather there each day. They hold signs against racial inequality and police brutality, and in support of the Black Lives Matter movement.

Another group is planning a larger protest over the same issues for Saturday, June 13, at 12:30 p.m. starting at the stadium on Lincoln Avenue.

During the protest at the police station, participants wear face coverings and take other precautions because of the coronavirus pandemic, organizers of the protest said.

Mayor James Fiorentini said gatherings of protesters on city sidewalks are allowed by the First Amendment to the Constitution and that permits from city government are not needed to hold such gatherings.

"Things have eased up and the strictest restrictions are no longer required," Fiorentini said about social distancing rules the governor put into effect weeks ago because of the coronavirus. "I am concerned about congregating as it's not possible to maintain social distance guidelines ... people must remember the COVID-19 problem is not over and we do not want a second outbreak."

Gina Faustin, 32, of Haverhill said she joined the protest after she saw a woman dressed in a Black Lives Matter T-shirt holding a sign that read, "First Justice then Peace — Patriot."

"We want change," Faustin said. "No matter what I do, I want it done peacefully and I want my message to be heard. We're just regular people from all walks of life who want to see change in a very broken system."

Dianne Donnelly, 31, of Haverhill, an eight-year Navy veteran who joined the protest group, is pushing for nationwide changes to how police are trained.

"Change needs to come from our leaders," Donnelly said. "Police need better training on how to deescalate situations, especially involving people of color ... clearly because black lives are still being lost and nothing is changing."

Faustin said the protest outside the police station is not just about punishing the police officers in Minneapolis who were charged in the recent killing of George Floyd, the black man who died after an officer knelt on his neck for more than eight minutes. The protest in Haverhill is also against all police officers who violate the public's trust, she said.

"It's not just those four officers, it's all of them," she said. "It's not about just one death, it's about hundreds ... thousands."

"I want the city, both the leadership and the community, to recognize we have a problem with racism," Karlstad said.

"The one shocking thing I learned was that the chief does not have the authority to fire and hire or reprimand an officer, and that it falls to the mayor," Karlstad said.

Faustin said the group's protest has attracted mostly positive responses from the public.

"People are listening now," she said as passing drivers honked their horns in support of the protesters on Thursday of last week. "I want an outside force to come in to look at police records for anyone who has had an incident such as police brutality. I want everyone to be accountable."

Faustin said she is considering taking part in the larger protest planned for June 13, but only if it's a non-violent event.