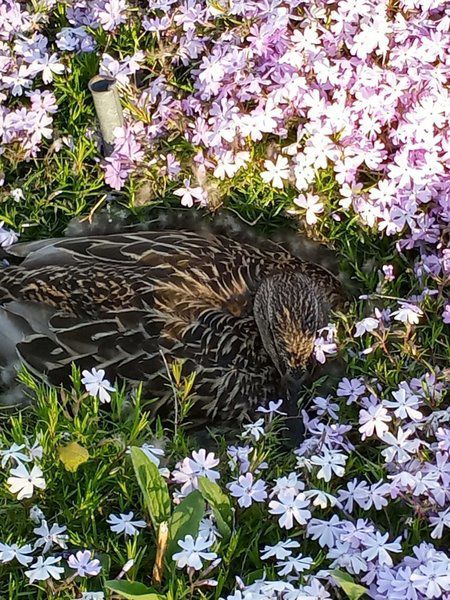 Courtesy photoA mother duck sits on its nest in a flower bed at Haverhill's Korean War Memorial in GAR Park. 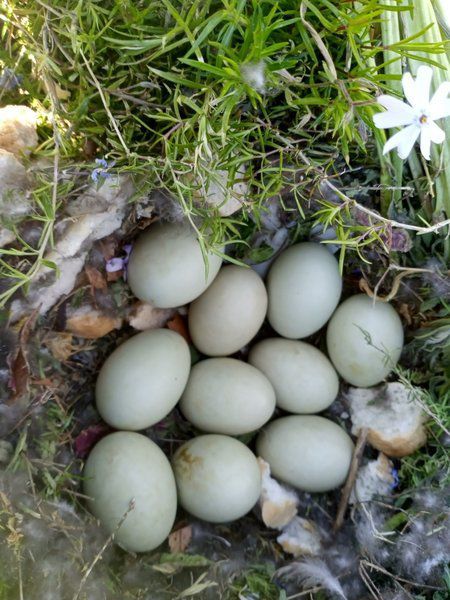 Courtesy photoEggs sit in a mother duck's nest in a flower bed at the Korean War Memorial in Haverhill. The eggs later hatched into a group of duckings that a man took to the nearby Merrimack River.

Courtesy photoA mother duck sits on its nest in a flower bed at Haverhill's Korean War Memorial in GAR Park.

Courtesy photoEggs sit in a mother duck's nest in a flower bed at the Korean War Memorial in Haverhill. The eggs later hatched into a group of duckings that a man took to the nearby Merrimack River.

A mother duck that built a nest in a flower bed at the city's Korean War Memorial would have led her babies to water, according to Mother Nature's plan.

But it didn't go that way.

Instead, this is what happened, according to people who watched the story unfold last week:

An elderly man who frequents GAR Park, home of the Korean War Memorial, took the ducklings from the flower bed there and put them into a box last Thursday morning.

While being followed by the mother duck — which was quacking loudly all the way — the man crossed the nearby Basiliere Bridge and released the ducklings into the Merrimack River, on the Bradford side where there is good access to the water.

"The man told me the babies were wandering around the nest and that he was worried they might not safely make it (to the river) ... on their own, so he brought them to the river himself," said Lucio Gomez of Haverhill, who had been caring for the mother duck at its nest before the elderly man got involved.

"At first I thought someone was doing something bad,'' Gomez said, "but now I'm thinking the man was protecting the ducks."

Gomez said the elderly man told him that after the mother and ducklings were released into the river, they swam away, apparently content.

Michelle Cannon, animal control officer for the city, said she learned about the mother duck and its nest a few weeks ago and began telling people who frequent GAR Park to leave the bird alone.

"People should not disturb wildlife, especially nesting wildlife," said Cannon, who was sent to an area near the Basiliere Bridge last Thursday at 8:19 a.m. after someone called police to report a man carrying a box of ducklings.

"I spoke to someone who was crossing the Basilere Bridge from the Bradford side who told me I was too late and that the babies had already been released into the water," Cannon said.

Russell V.J. Chaput is the founder of the Korean War Memorial Association that erected the memorial where the mother duck built its nest. Chaput said he had been quietly observing the duck at the memorial and didn't want to bring attention to the bird.

"She was in the nest when I visiting on Wednesday," Chaput said of time he spent at the memorial last week. "I brought water and she had a little drink."

Gomez said he visits the park often with his 11-year-old daughter, Maria, and that they first noticed the mother duck about a month ago. He said he's been stopping by the park every day after work.

"Maria was always excited to see the duck and bring her rice, bread and water," said Gomez, who last visited the nest at 9 p.m. last Wednesday.

"Only one of the 10 eggs that were in the nest did not hatch," Gomez said.

Responding to ducklings is nothing new to Cannon, the animal control officer.

"Every year we gather up ducklings that hatch in the Consentino School courtyard, where there are no predators," she said. "Once they are big enough, we round them up while the mother waits and watches and we release the babies in front of the school, where the mother then leads them away."

Cannon said the same thing happens in an enclosed courtyard at Haverhill High School, where a mother duck builds a nest each year.

"They're smart,'' Cannon said of the mother ducks. "They raise their young where there are no predators, but their babies must be strong enough to fight the current (of the river).''