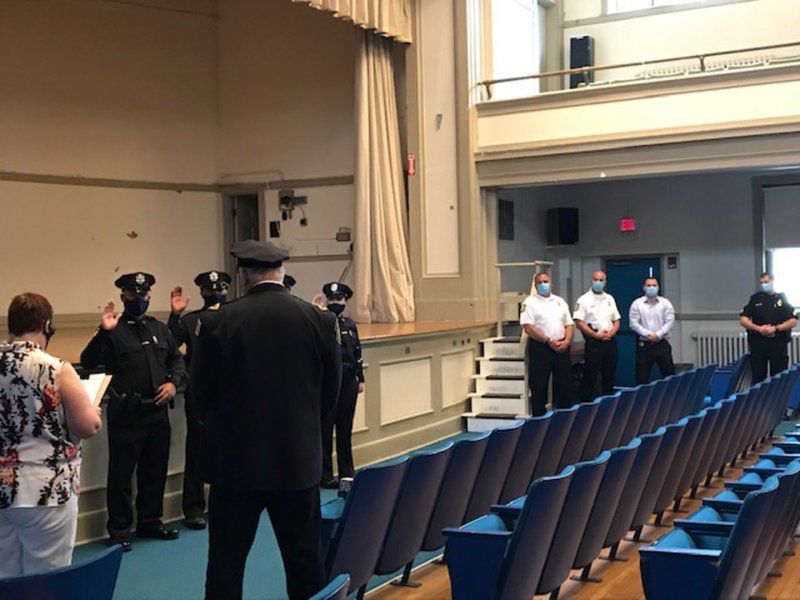 Some of the new officers raise their hands as they are sworn in by City Clerk Linda Koutoulas. Watching are Chief Alan DeNaro and members of the Police Department Command staff. 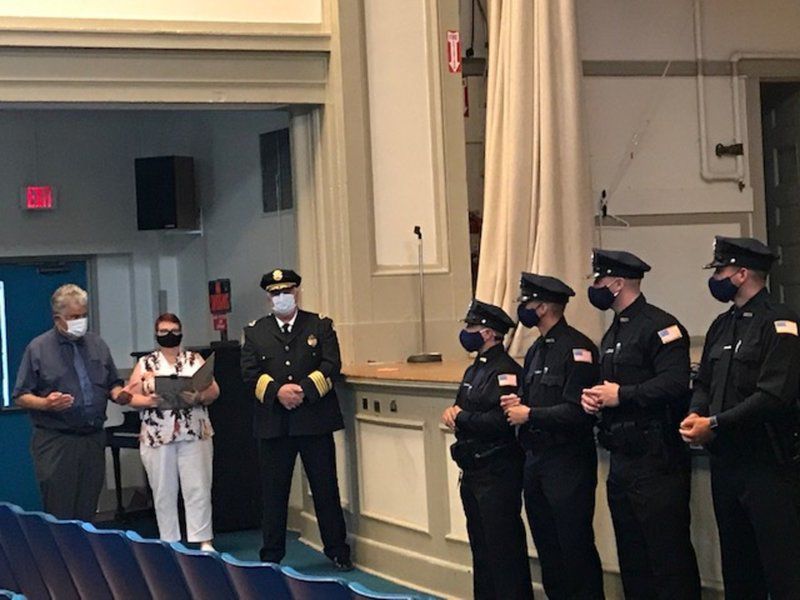 Some of the new officers raise their hands as they are sworn in by City Clerk Linda Koutoulas. Watching are Chief Alan DeNaro and members of the Police Department Command staff.

The city has boosted its police force by 13 officers, bringing its total to 102 — perhaps the most in Haverhill’s history.

The new officers sworn in last week also add more women and minorities to the force, creating balance and making the Police Department more representative of the racial makeup of Haverhill as the debate over racial inequality rages locally and nationally, Mayor James Fiorentini said.

Five minority officers and two female officers were among those sworn in at a ceremony last Wednesday in City Hall.

The 13 recruits graduated from the Northern Essex Community College/Methuen Police Academy earlier last Wednesday and headed straight to City Hall to be sworn in by City Clerk Linda Koutoulas.

“These new hires bring us to a total of 102 sworn officers — the highest number of officers actually on the street in recent history and perhaps ever,” the mayor said. “The city has been reaching out to diversify its police force and its workforce in general and these 13 new recruits, which include five minorities and two female officers, are a significant step in that direction.”

The two new female officers bring the total women on the force to 14. Four of them are supervisors.

The swearing-in ceremony was attended by Fiorentini, Chief Alan DeNaro, members of the Police Department command staff, and relatives and friends of the new officers.

“We’re absolutely thrilled to have them,” Fiorentini said of the new officers, adding that they were sworn in three separate groups due to COVID-19 social distancing concerns. “This is a tough time right now for police officers. We have been understaffed in Haverhill because of retirements so we welcome the opportunity to fill some of our vacancies and put officers back on the street. Keeping our citizens safe is always a top priority in this city.”

Fiorentini’s proposed 2021 budget includes money to bring police staffing up to 110 sworn officers — the most in Haverhill’s history.

Haverhill is working to bring in more officers as the city’s population grows with the addition of new housing developments. The city is also grappling with problems caused by inner-city street gangs.

“We hit the ground running,” the chief said.

The new recruits are: