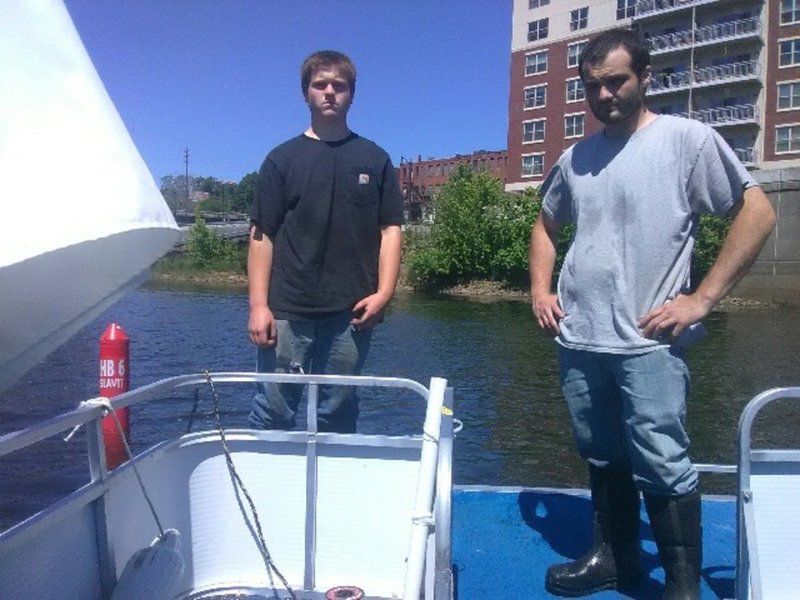 Courtesy photoRyan Slavit, left, and Tim Slavit Jr. take a break during the installation of channel marker buoys in the Merrimack River in Haverhill. 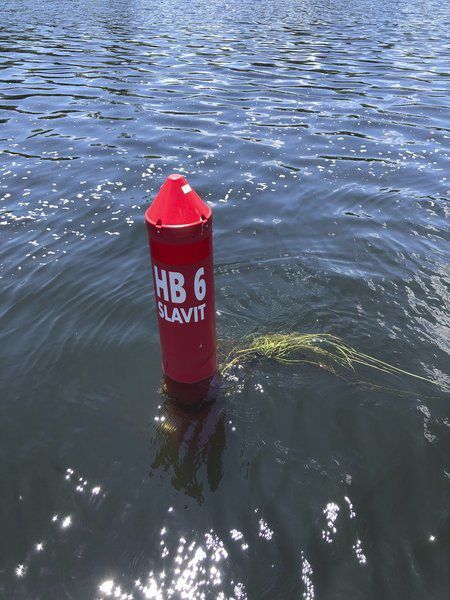 Courtesy photoOne of the channel markers, displaying HB for "Haverhill Buoy'' and "Slavit'' because it is owned by the Slavit family, sits in the river near downtown.

Courtesy photoRyan Slavit, left, and Tim Slavit Jr. take a break during the installation of channel marker buoys in the Merrimack River in Haverhill.

Courtesy photoOne of the channel markers, displaying HB for "Haverhill Buoy'' and "Slavit'' because it is owned by the Slavit family, sits in the river near downtown.

HAVERHILL — When it comes to the downtown stretch of the Merrimack River, everything is falling into place.

New channel markers have been put into the river, plans are in the works to install more public docks, and the new Barrio restaurant is close to opening at Harbor Place overlooking the waterway.

In addition, a new center for kayak rentals and guided tours is about to open along the river.

Add it all up, and this could be Haverhill's year of the waterfront.

Efforts to capitalize on the city's most valuable natural resource recently got a boost with the installation of new river channel markers in a previously unmarked section between the Basiliere Bridge and the Merrimack River train bridge, just upstream from the public docks behind The Tap restaurant.

City and business leaders hope those markers will promote a sense of safe boating and welcoming to downtown, eventually attracting more boaters from downriver communities such as Newburyport, Salisbury, Amesbury, Merrimac, West Newbury and Groveland.

The hope is that those boaters will visit to explore downtown Haverhill shops and dine in the city's restaurants.

"We're fortunate to have a downtown on the waterfront," said Dougan Sherwood, president of the Greater Haverhill Chamber of Commerce. "Our hope is that the buoys will increase the number of people coming to visit by boat, and the launch of Plum Island Kayak's business on our city docks will make the river more accessible to locals and visitors alike.''

Sherwood said the chamber is orchestrating a kickoff event for Plum Island Kayak to be held July 1 at 11 a.m. on the city docks. The event will include city and state officials. The public is invited.

"We hope this will ultimately help people see Haverhill as a destination and be a boon to our downtown restaurants and retail," Sherwood said.

The new river channel markers, six buoys in total, were installed by Tim Slavit and his sons Tim Jr. and Ryan, with help from their longtime friend Bob Brandolini.

Several years ago, four buoys were donated to the Greater Haverhill Foundation's River Access Committee, which recently gave Tim Slavit permission to use them. Slavit said he purchased two additional buoys and chains.

"I was inspired by Mayor James Fiorentini to install the buoys after the mayor told me he wanted to promote the river as a source of recreation and tourism," Slavit said. "It was such a good feeling putting those buoys in the water. My father would be very happy to see that."

Slavit's father, the late William J. "Captain Red" Slavit, served in the U.S. Coast Guard during World War II and later ran excursion boats on the river, bringing crowds of people to Haverhill to listen to his colorful stories about pirates and other maritime tales.

The elder Slavit was both the official and unofficial harbormaster for Haverhill and answered every call for help on the water, day or night, whether it involved the river or one of the many lakes and ponds in the city. Tim Slavit served as his father's assistant harbormaster.

Dave Goodwin, a member of the Greater Haverhill Foundation's River Access Committee, said boaters without knowledge of the channel and obstacles such as rocks can have difficulty navigating safely.

"With the new buoys, there is the potential of more boats coming up river," he said.

Each buoy is registered with the U.S.Coast guard as a "private aide to navigation" and will be listed in the local "notice to mariners" published by the Coast Guard and available to the public, Goodwin said.

Also as part of the river effort, the Haverhill Harbor Commission has been meeting with the River Access Committee to discuss other ideas , such as adding more city docks just downriver from the Basiliere Bridge.

"There is still more we can do,'' Sherwood said, "to make this river more connected to the people of Haverhill,"