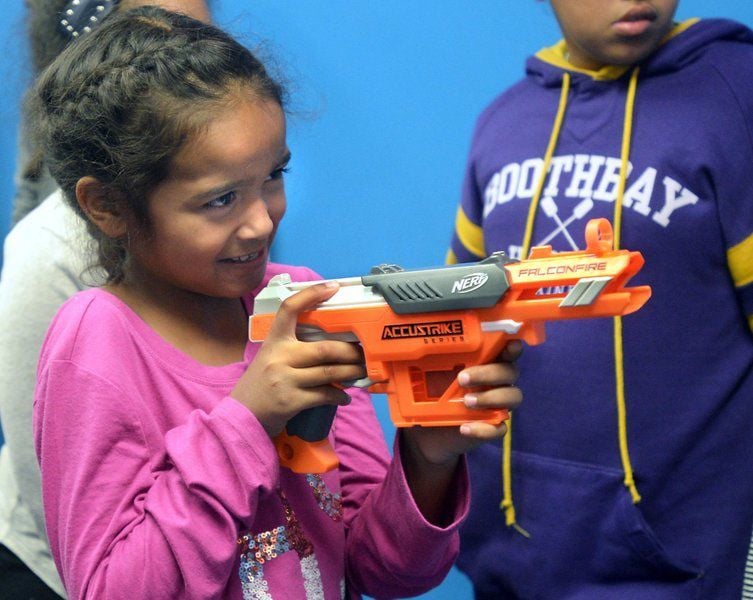 Leah Jimenez, 7, gets ready to shoot during the turkey shoot. 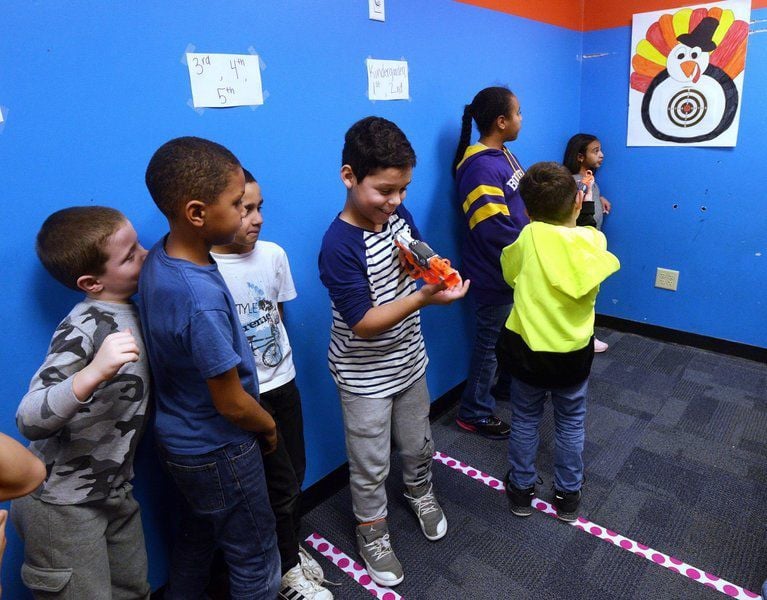 CARL RUSSO/Staff photoChildren wait their turn to shoot at the target during the annual turkey shoot sponsored by the Boys & Girls Club.

Leah Jimenez, 7, gets ready to shoot during the turkey shoot.

CARL RUSSO/Staff photoChildren wait their turn to shoot at the target during the annual turkey shoot sponsored by the Boys & Girls Club.

Kids at the Boys & Girls Club of Greater Haverhill used to shoot BBs at turkey targets with hope of scoring enough points to win a frozen turkey for their family.

For purposes of safety, the club switched to Nerf guns several years ago, yet the kids still feel the same level of excitement when blasting away at images of a turkey taped to a wall.

Thirty club members received frozen turkeys from the club, as well as the Haverhill Ridge Runners Fish and Game Club and Ocasio’s True Martial Arts, in time for Thanksgiving.

For three nights last week, club members line up by grade level to shoot at an image of a turkey with a bulls-eye and rings denoting points from 10 down to none.

“This is my first time doing this,” said Adrian Guerrero, 8, a third-grader at Silver Hill School. “If I win a turkey, my parents will cook it for Thanksgiving.”

Club members from kindergarten through high school were given three chances to score as many points as they could. The top scorers, by grade-level groupings, competed in a championship round late last week.

Children in the kindergarten and grade one and two group chatted among themselves as the event was underway, eager to get their turn to shoot.

“I missed twice,” said Jollianny Eason, 7, a first-grader at Silver Hill School. “Then I shot a 10.”

Port Charlotte - Gary Evans Bertram, 86, passed away peacefully on December 25, 2021, after a lengthy illness. Gary was born in 1935, in Brooklyn, NY, the son of Henry Bertram and Jane Evans Bertram. Gary's family moved to Merrimac, MA, when he was in the first grade. Gary was a businessman …

Haverhill - Shirley was a belo...

Haverhill - Roberta A. Nelson, 83, of Haverhill, MA, passed away Monday, December 6, 2021, at Holy Family Hospital, Methuen. She was born in Norwalk, CT, on June 27, 1938, daughter of the late William J. and Amelie P. (Perry) Main. Roberta was educated in Westport, CT school system. She was …