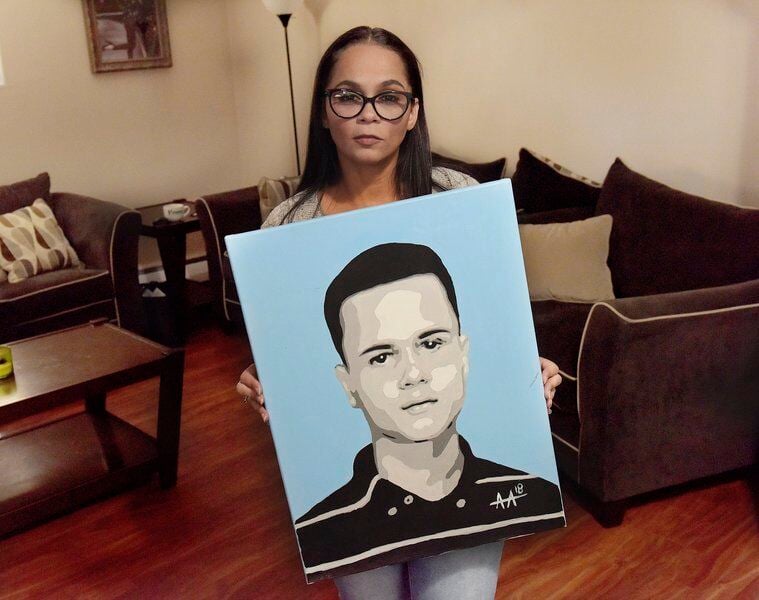 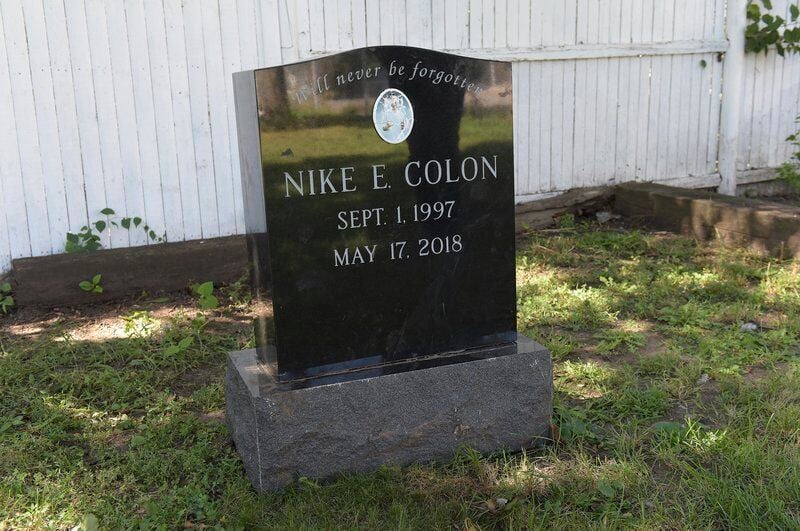 Nike Colon’s family moved his gravestone out of a Lawrence cemetery because it was being vandalized.

Nike Colon’s family moved his gravestone out of a Lawrence cemetery because it was being vandalized.

In the past two years, Michelee Geronimo and her family have experienced the unthinkable.

Her son Nike Colon was killed May 17, 2018, in a drive-by shooting in Haverhill's Mount Washington neighborhood — an incident that police said was gang-related.

Colon, who lived in Haverhill, was 20 years old. The man charged with murdering him, Eddy Almonte of Haverhill, was captured by police in Virginia 12 days later.

Geronimo, who lives in Haverhill with her husband, Nestor, buried her son in St. Mary's Cemetery in Lawrence shortly after his death, and thought she could finally take a deep breath as her family began the grieving process. That lasted until April of the next year, Geronimo said, when her son's headstone was vandalized.

It was the first of three times the headstone was damaged before Geronimo, angry and heartbroken, decided to remove the stone from the cemetery — and exhume her son's body to be placed at another grave site.

"I don't think anybody ever thinks that when you bury your child once, you'll have to do it again," Geronimo explained through tears during an interview at her home. "I shouldn't have to feel like the extent of 'feeling OK' was bringing his stone home separate from his body."

Geronimo said she filed a police report after the first act of vandalism, in which her son's headstone was knocked over and chipped away at, but no one was charged with causing the damage. A second act of vandalism happened in the summer of 2020, Geronimo said, when vandals poured an oil-like substance on the headstone. The family was able to clean the stone, but Geronimo lost her patience over Labor Day weekend when a friend of her son reported more damage.

"The picture of Nike we had on his stone had been shattered," Geronimo said of the incident, believed to have happened overnight Sept. 4 into Sept. 5. "That was my last straw. I went to the cemetery and brought the stone home. I just took it out and brought it home."

The family has chosen to keep the details of Colon's new grave site private, with only his parents, siblings and an aunt who lives locally knowing the location. Geronimo said a small space at the family's home will be dedicated to remember Colon, allowing relatives and friends to grieve in their own way.

"I've gotten a lot of messages from Nike's friends. They're understanding that they won't know where he'll be now," Geronimo said. "He was buried, and he was publicly buried, and they had the chance to visit him, but (vandalism) keeps happening. For my family's mental health and healing, we can't keep doing this anymore."

Geronimo said her son's stone was not the only one vandalized at St. Mary's Cemetery. Merrimack Valley Gas Disaster victim Leonel Rondon is also buried there. His headstone was spray painted with graffiti, Geronimo said.

"My son isn't the only one who has had his stone vandalized, but when the vandalism is intentional to my son, it just hurts," Geronimo said, adding she doubts the damage to Colon's headstone is related to the gang tensions in Haverhill. "Nobody who goes to visit a loved one at a cemetery should have to see something like that. We're not even done grieving. We still have a murder trial going on. There's a lot that's left us feeling like we've had no peace since burying him — and this isn't helping."

Police said Colon's death was part of a war between street gangs in Haverhill. Colon was sitting in a parked pickup truck in the Mount Washington neighborhood when Almonte drove up and fired a shot into the truck, fatally wounding Colon, police said.

Almonte next appears in superior court this month for a conference to determine when his trial will happen.

Franklin NH - David P. Bartlett formerly of Hampstead, NH, passed away on September 16 2020 at home with his wife Laura(Skelton) by his side. David graduated from Haverhill Trade school where he studied to become an electrician. After graduation he joined the US Coast Guard and was stationed…