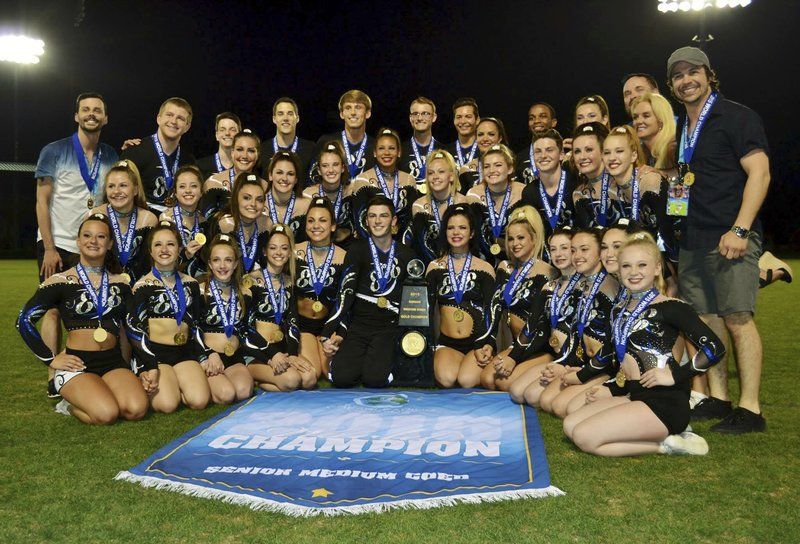 The C5 or Medium Coed 5 Level Team from East Celebrity Elite in Tewksbury recently won a gold medal at the Cheerleading Worlds competition in Orlando.4/30/2015 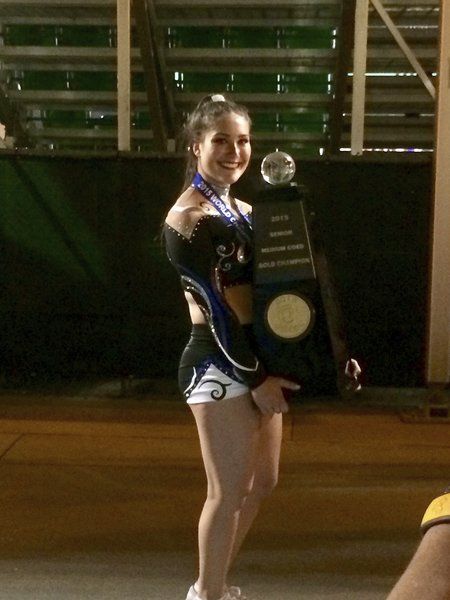 The C5 or Medium Coed 5 Level Team from East Celebrity Elite in Tewksbury recently won a gold medal at the Cheerleading Worlds competition in Orlando.4/30/2015

She's a cheerleader for her school's football and basketball teams during the fall and winter.

She volunteers locally with organizations like Lazaus House and the Special Olympics.

Kayla McCarthy does plenty close to home, but her influence is now being felt nationally, even internationally.

Kayla, 16, of Bradford recently helped her local cheerleading team win a gold medal in the Cheerleading Worlds event, which drew more than 500 teams from more than 40 countries.

The event was held April 25 to 27 at the Wide World of Sports complex in Orlando.

Kayla is a member of the C5 or Medium Coed 5 Level team at East Celebrity Elite, based in Tewksbury. Her specialty is "base," a position in which she lifts other members of the team into the air then catches them. She also is an elite tumbler. The team consists of 22 girls and eight boys from Massachusetts, New Hampshire and Maine.

Level 5 is the highest level of competition in cheerleading for school-age participants, and involves the most difficult stunting and tumbling in All Star Cheer, a national and international competitive cheerleading program. College students can compete at Level 5 or Level 6.

Kayla's team qualified for a "paid bid" to compete at the Cheerleading Worlds. The paid bid amounted to $25,000 that helped pay for her team's trip to Florida. Once there, the local team had outstanding performances.

"It's like the Olympics of cheerleading," said Cheryl Pasinato, one of  East Celebrity Elite owners. "And like winning a gold medal at the Olympics, our team won a gold medal in their Medium Coed Level 5 Division, in which there were more than 30 teams competing."

Pasinato said C5 was the only New England team to ever win a gold medal at the Cheerleading Worlds event, where the team was considered an underdog yet beat out favored teams from Texas, California and Oklahoma.

"They had the performance of a lifetime," Pasinato said. "Their performance was perfect."

Pasinato said Kayla is a very respectful and hardworking girl with a tremendous amount of skill and talent, and a very good performer.

Kayla said she first got into cheerleading eight years ago at East Celebrity Elite while she was a student at Bradford Elementary School.

"I saw a cheerleader on 'Ellen' once and I thought it was the coolest thing ever," Kayla said of the popular TV show. "And now I compete against the girl who was on 'Ellen.'

"We were hoping to make it into the top three as we've never won a medal at the Worlds," Kayla said of the competition in Florida. "There were only two other teams in our division to do their routines perfectly, so we knew that if we did well we'd be in the top three.

"We did everything we've been working on as a team and we really wanted to win," she said. "When they announced we had won the gold, we hugged each other and other teams ran towards us and hugged and congratulated us. I've been trying win Worlds for the past six years, but something changed this year. Everyone on the team really wanted to win this year."

At Central Catholic, Kayla is a student ambassador, a volunteer position in which she gives tours of the school and leads orientation walks for new students. She has volunteered with the Special Olympics as an aide to athletes, served as a volunteer for the Hike for Hope fundraising event, and has volunteered at Lazarus House in Lawrence by helping to organize its thrift store.

Kayla said her career goal is to become an oral surgeon.

"A smile is one of the first things you notice," she said.

Does volunteer work such as giving tours at Central Catholic and helping Special Olympics, Hike for Hope and Lazarus House

Hopes to become an oral surgeon