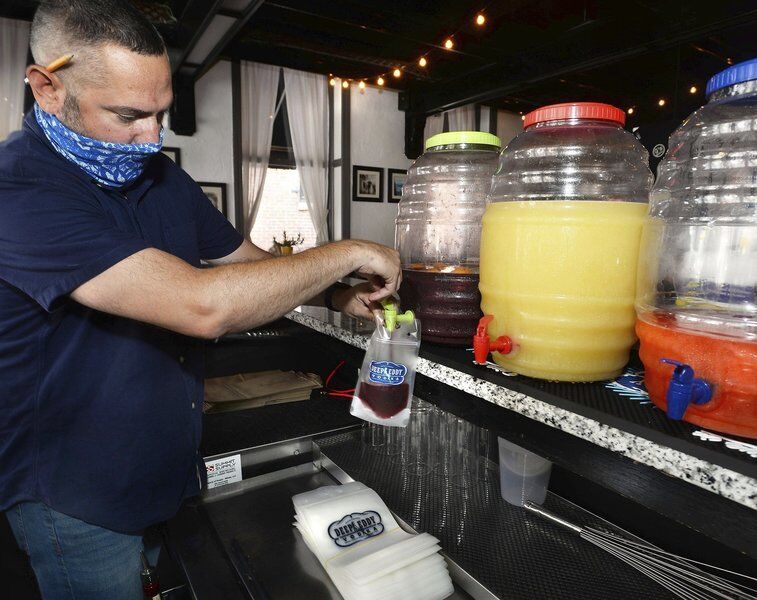 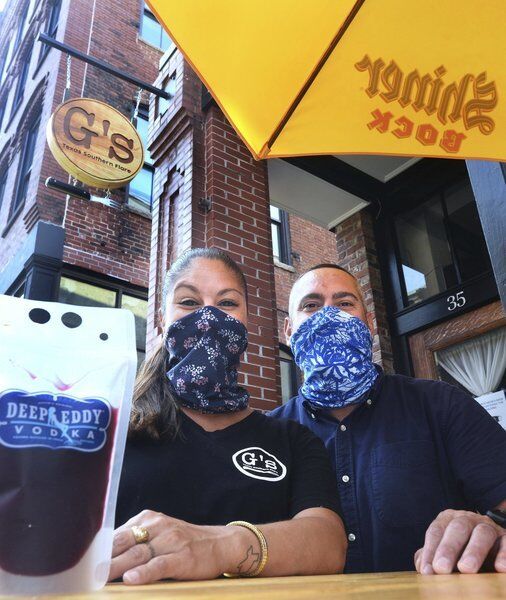 Anyone can make a gin and tonic or a Tito’s and soda at home.

How about an espresso martini? Or an old-fashioned? Or anything that has strawberries that have been infused in vodka for four days?

“I don’t think anyone will do that,” said Matt Gaiero, owner of G’s Texas Southern Flare restaurant at 35 Washington St., Haverhill.

And that’s good both for Gaiero and his customers, who now can take advantage of a recently passed state law allowing takeout drinks with takeout food orders.

As the COVID-19 pandemic has ravaged the health of millions and caused economic calamity across the planet, few businesses have been hit harder than bars and restaurants.

Under the phased reopening of the economy as ordered by Gov. Charlie Baker’s administration, eateries, now opening with limited capacity and added outdoor seating, could serve wine and beer with takeout meals as of a few weeks ago.

But mixed drinks were not allowed — until last week.

A bill championed by state Sen. Diana DiZoglio, D-Methuen, who is chairwoman of the Joint Committee on Economic Development and Small Businesses, was finally signed into law by Baker after making a tortuous, months-long voyage through the state Senate and House.

Not a moment too soon, say restaurant owners, most of whom immediately began serving mixed drinks with to-go food orders.

“We started Tuesday” of last week, said Gaiero. “We did six or seven the first day.”

Gaiero, who has owned the business for just over a year, said his bartender mixes the drinks in plastic to-go cups, sealing the lid and the straw hole with tape. If the patron is pulled over and the tape has been tampered with, the driver might be in trouble. Otherwise, as long as the tape is still secure, the to-go drink is perfectly legal.

Gaiero said his distributor has also provided special, resealable pouches that can be filled with specialty mixed drinks such as sangria, margarita or lemonade with vodka-infused strawberries.

“As far as some of our specialty cocktails, people don’t make them at home,” he said.

“It will help,” said Laura Wolfe, who owns four restaurants, including two in Newburyport and two in Wellesley.

“My bartenders have been making fabulous drinks for a while, so it’s just a matter of putting them in a to-go container,” said Wolfe, who owns The Poynt on Water Street and Brick and Ash at 10 Center St., Newburyport. “I can’t wait to get some of our crafted cocktails out to people. It will be great.”

Wolfe and several other restaurant owners traveled to the Statehouse three weeks ago to testify in favor of DiZoglio’s bill, and they were thrilled when it passed.

“We really appreciate all the help from Sen. DiZoglio,” Gaiero said. “We thank her for getting this bill passed.”

“We are very grateful for Diana. She’s had a big impact on our community,” Ghaouta said of DiZoglio. “We are really excited. We know it’s going to help tremendously with extra income for our business.”

Ghaouta said she and her staff are trying to figure out how to do the packaging, and that her husband was talking to a company about how to make a container that is secure and won’t get her customers cited for an open-container violation if they get pulled over.

“Since we’re Mexican, margaritas will be one of the highlights for takeout drinks,” she said. “We even have an avocado margarita and another one with chipotle tequila.”

Jason Petrou, whose family owns the Krueger Flatbread restaurant at 142 Essex St., Haverhill, said since it was closed for three months, the restaurant had a lot of alcohol inventory lying around.

“Being able to move anything we can helps,” he said, adding that he has already served a number of his specialty cocktail, the espresso martini, in the same kind of resealable package used by Gaiero.

“It’s restaurant quality, and you can pour it into a martini glass when you get home,” Petrou said. “And it adds $13 to our bottom line. Every dollar helps.”

DiZoglio said she was glad she could help her constituents as they struggle with the economic woes wrought by COVID-19.

“This was truly a grassroots effort by our communities’ family-owned and operated small businesses,” she said. “I am humbled they approached me to lead this effort.

“We continue pressing for more relief measures to get passed,'' she said, "but this is one additional thing that will assist them in their economic recovery.”