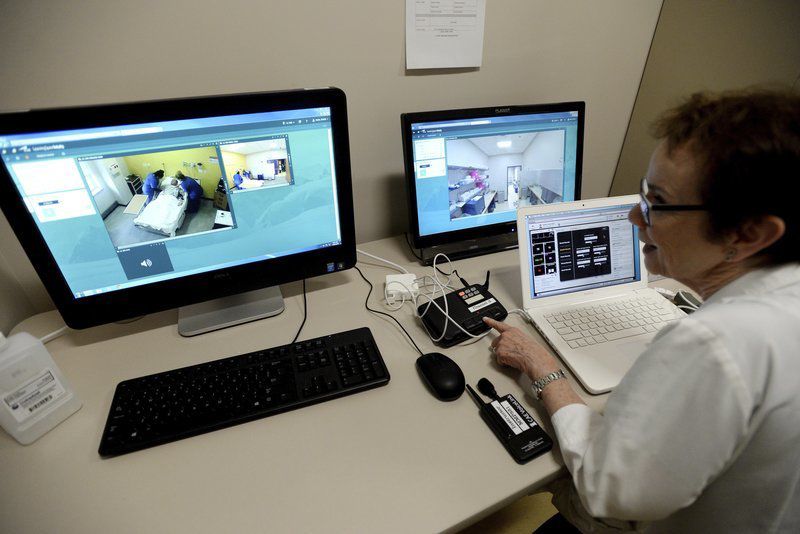 PAUL BILODEAU/Staff photoInstructor Sheila Kane staffs a control room where she uses a computer to change a mock patient's symptoms during a nursing class at Northern Essex Community College before the pandemic. 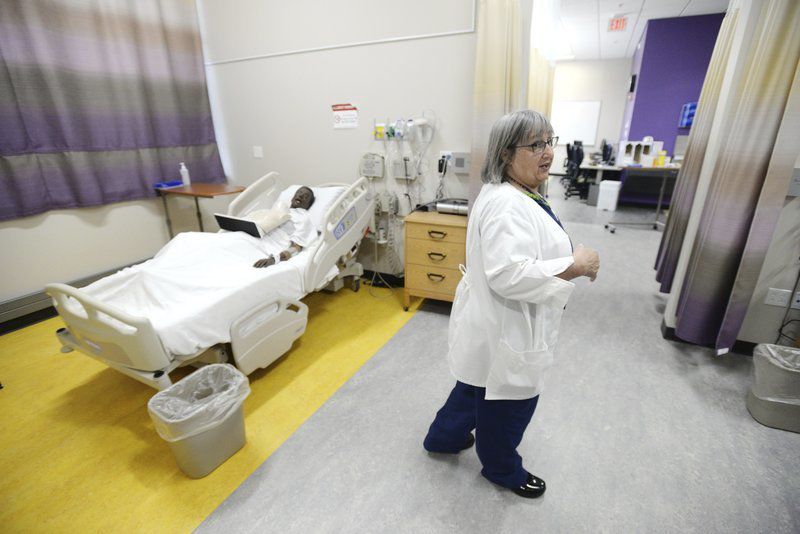 PAUL BILODEAU/Staff photoInstructor Sheila Kane staffs a control room where she uses a computer to change a mock patient's symptoms during a nursing class at Northern Essex Community College before the pandemic.

Ever since Northern Essex Community College launched its first nursing program in 1970, its graduates have been caring for patients in hospitals, clinics, long-term care facilities, doctor's offices and schools.

If you've been a medical patient locally, chances are one of the college's 3,500 nursing graduates has cared for you.

Now the program is coming to the community's rescue as the coronavirus crisis continues — and as the college celebrates the its nursing program's 50th anniversary.

Members of the next NECC class of associate degree nursing students to graduate later this month will have the unique opportunity to begin working immediately as registered nurses, while waiting to take their licensing exams this summer.

During normal times, they would not be allowed to work until being licensed, college officials said.

"The governor recently signed an order allowing current nursing graduates to work in health care before they obtain their license, because of the great need for nurses during the current health crisis," said Mary Farrell, NECC's dean of health professions. "There is a tremendous need for nurses in Massachusetts at this time and Northern Essex is doing its part to provide them, just as it has done for the past 50 years."

Although the 30 members of this year's associate degree class have not been able to go into hospitals for the past six weeks to practice their clinical skills, they continue working on those skills through virtual scenarios as the college uses alternate methods of teaching.

"They still had exposure to clinical skills at local hospitals last year and the first half of this spring semester," Farrell said. "We expect a 100 percent placement rate as the need for nurses is so great at this time."

A half-century after the college's first graduating nursing class ventured into the world of health care, the program continues to flourish.

"It's hard to believe 50 years have passed," said Jeannine Press of Methuen, a member of that first class.

At that time, NECC held classes in the Greenleaf School in Bradford and in Haverhill's City Hall.

"I was married and raising two children when I saw an advertisement about the program that was just starting in the fall of 1968," Press said. "Tuition was $100 per semester and we received college credit, which was a great stepping stone in achieving my bachelor's, then master's degree."

"Over the past 10 years we have seen more men choosing nursing as a profession," she said about the mostly female-dominated line of work. "All of our students come to us with a desire to help others in a caring way."

She was accepted into the nursing associate degree program for this fall and is working as a certified nursing assistant with the Massachusetts COVID-19 relief team, caring for patients at Meadow Green Rehabilitation and Nursing Center in Waltham.

"I was attracted to NECC's nursing program because it is very competitive and has a private school feel with a community college price tag," said Delequexe, whose great-great grandmother Eliza Linville cared for patients during the Yellow Fever epidemic in the late 1880s in Memphis. Because of that work, contracted the disease and died.

"When I'm caring for people, I feel a connection to Eliza and what she might have experienced during that epidemic," said Delequexe, whose goal is to become a nurse practitioner and work with under-served populations, including people experiencing homelessness.

"Working in health care is not a job for me, it's a calling," she said.

"Close to one third of our students are majoring in health care," Greenslade said.