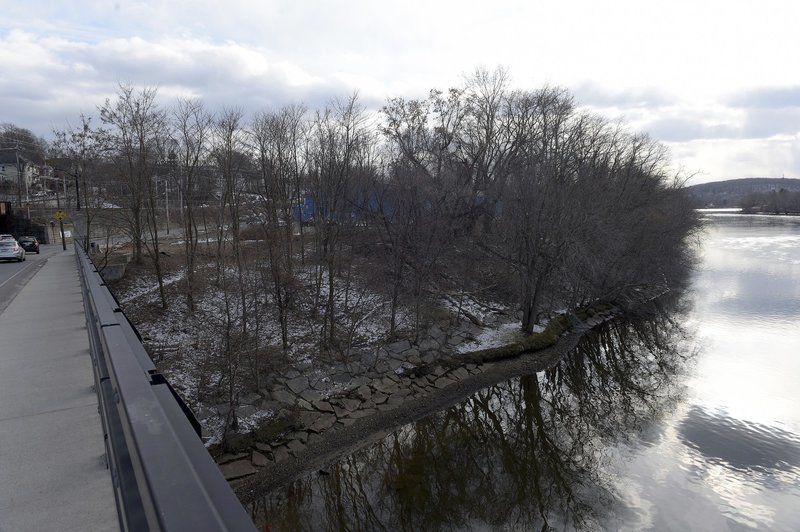 TIM JEAN/Staff photoThis overgrown land in Bradford that juts out into the Merrimack River would be the home of the 290-unit project. 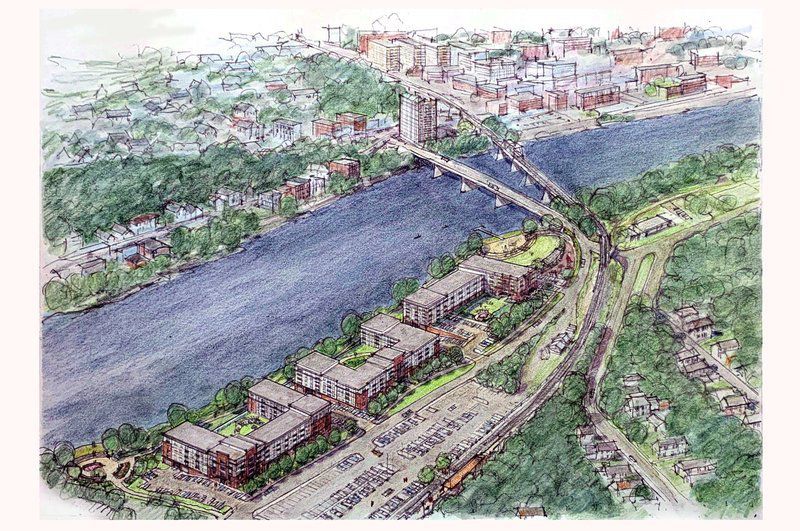 Courtesy photoAn artist's rendering of the proposed development shows a series of new buildings along the Bradford side of the river (lower part of image). 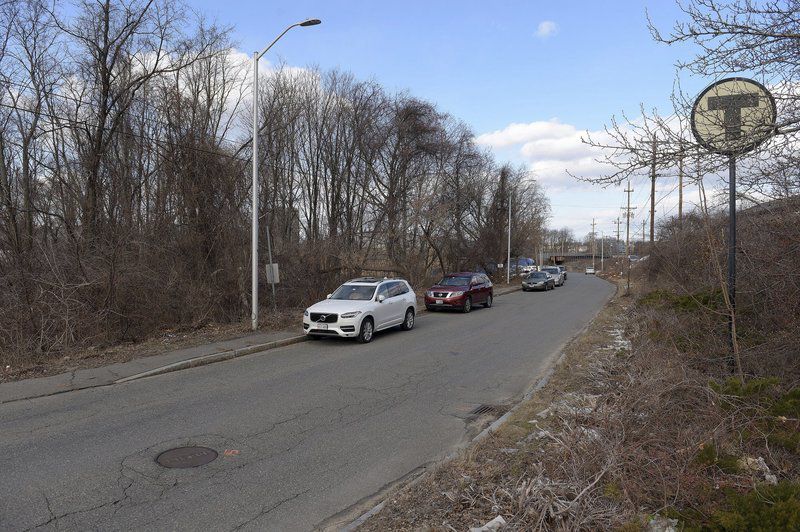 TIM JEAN/Staff photoA developer wants to build the complex on vacant land, left, between the Bradford train station and the Merrimack River.

TIM JEAN/Staff photoThis overgrown land in Bradford that juts out into the Merrimack River would be the home of the 290-unit project.

Courtesy photoAn artist's rendering of the proposed development shows a series of new buildings along the Bradford side of the river (lower part of image).

TIM JEAN/Staff photoA developer wants to build the complex on vacant land, left, between the Bradford train station and the Merrimack River.

When a proposal for a 290-unit housing development along the Merrimack River was announced last week, some locals got excited because the project would create pubic parks and trails next to the waterway.

Some city leaders were happy too, as Haverhill finally got a proposal for the long-vacant 4.8-acre site on the Bradford side of the river. The project would bring big money to the city — $19 million in taxes and other payments over the next two decades.

But as Mayor James Fiorentini works to seal the deal for the project, concerns from local people are emerging.

Some residents say they want Haverhill people to be able to live in the project overlooking the river. They say the plan for all 290 units — upscale studio as well as one- and two-bedroom apartments — to have market-rate prices could keep Haverhill people from affording to live there.

Other locals expressed concerns that Skateland, a roller skating rink that has been in operation in that area since 1950, could be sold to the developer and be demolished to make way for a public park as part of the project.

Public safety officials say they will closely review the expectation of increased traffic from the project and firefighters' ability to respond to the site during an emergency.

Fiorentini announced Thursday that The Procopio Companies of Lynnfield wants to buy the city-owned 4.8-acre site at 31-35 Railroad Ave. for $1 million and build the apartments, along with retail space.

As the mayor prepares to ask City Council to sell the land to The Procopio Companies of Lynnfield this week, the proposal is generating reaction across the community.

City Councilor Mary Ellen Daly O'Brien served on a committee that evaluated bids from three companies in response to the city's request for proposals for the former Ornsteen Heel factory property. The factory was demolished years ago, leaving the 4.8 acres vacant. The land is now owned by the city.

Daly O'Brien said the development proposed by The Procopio Companies is positive because it would generate public access to the river.

"The fact that this plan includes using the land where the gas station was,'' she said of a now-closed gas station that has sat vacant for more than a decade, "and is adding more amenities including a playground, as well as retail activity facing that park, will contribute to the community .... No matter where you live in the city, you'll be able to park there and put your kayak or canoe in the river."

Daly O'Brien said she also likes the plan because it utilizes the land in a better way than proposals from the two other bidding companies.

"This project is more functional for the public to use and more attractive than the other two proposals, including access to the river," she said. "It's more than just apartments .... It will have more of a connection to the city and is definitely a betterment.

"They really thought about doing something that all of Haverhill can utilize and enjoy," she said of the Procopio firm.

Fiorentini said he is not involved in negotiations between the owner of the Skateland roller skating rink and The Procopio Companies. The mayor said, however, that if Skateland does end up being demolished, he wants to work with the owner to find another location for the rink in Haverhill.

Skateland's owners and manager have been unavailable for comment.

Dozens of children were having fun at Skateland on Friday, the last day of February school vacation in Massachusetts. The rink was open from 1 to 5 p.m. and was attracting kids all week.

Richard Sarros of Haverhill brought his 6-year-old daughter Mia, a first-grader at Silver Hill Elementary School, to the rink.

"I've been to roller skating rinks in Boston, New York City and Los Angeles, and this is one of the best and it's well maintained," he said. "This is Mia's second time skating here and my first."

Sarros said it would be a shame to lose the rink — a loss for many children in the area.

"Kids need to be more active and this is a great place for them and for families," he said.

"This place,'' his daughter added, "is amazing."

Fire Chief William Laliberty said concerns about traffic and how it might impact firefighter response time will be studied once the proposal works its way through city departments for review.

"It's hard to comment without seeing the actual plans and it's hard to say what the problems might be,'' he said, "although it sounds like there would be more traffic. How it affects emergency responders we just don't know until we hear more.''

Laliberty said the Fire Department has two ladder trucks which alternate being used by crews at the central fire station on Water Street. The ladder truck serving as a backup is stored at the Bradford Fire Station.

He said Ladder 1 is too heavy to cross the Basiliere Bridge based on the structural condition of the bridge, which is scheduled for repairs, while Ladder 4 can travel over that bridge. Both trucks, however, can travel over the Comeau Bridge next to the site of the proposed development. Traffic would likely be an issue on that route — fire trucks leaving the Water Street station would have to pass through downtown and then cross Comeau Bridge.

The mayor said he will ask City Council on Tuesday to designate The Procopio Companies as the “preferred developer” of the site. If that happens, Fiorentini will begin negotiating an agreement with the company. Any final agreement must be brought back to the council for approval.

Fiorentini said he would like the project to have not only market-rate apartments. He hopes it will include some "workforce" housing for middle-income working people — not low-income units — but he's not sure if that can happen.

"I don't want to promise what I can't deliver," he said. "I don't know if it's doable or if the council would want it, so at this point it's strictly a market-rate project that's being proposed."

He said a prior proposal in 2018 by the Neighborhood of Affordable Housing Inc. (NOAH) of East Boston included a mix of market-rate and workforce housing, but that the proposal was rejected by the City Council,

"The exciting thing about this development is they don't require much government subsidies, whereas the other two bidders did," he said in reference to the two other bids for the site that were not accepted.

Fiorentini said The Procopio Companies will seek to participate in the Housing Development Incentive Program, which gives the developer access to state tax credits.

"This would be more nowhere close to the credits and tax relief and tax subsidies requested by the other two bidders," the mayor said. "This makes it much more likely the project will happen as they don't have to wait to see if they get subsidies or not."

Fiorentini said the project being proposed would not happen without the waterfront zoning that was put in place which requires that a developer create public space such as parks and walkways.

"All I'm asking for is the ability to negotiate a contract," Fiorentini said, noting that before the project can proceed, it will require the developer conduct a traffic study and create a traffic plan, as well as how the project would impact schools, although he expects little impact in that area.

"Typically these kinds of projects bring few children as they are only planning to offer studio as well as one and two-bedroom apartments, at market rate," he said."I told the buyer that it makes no sense to go forward if the council isn't open to this project."