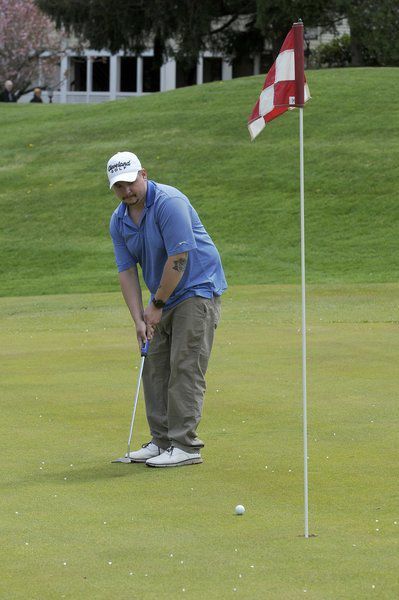 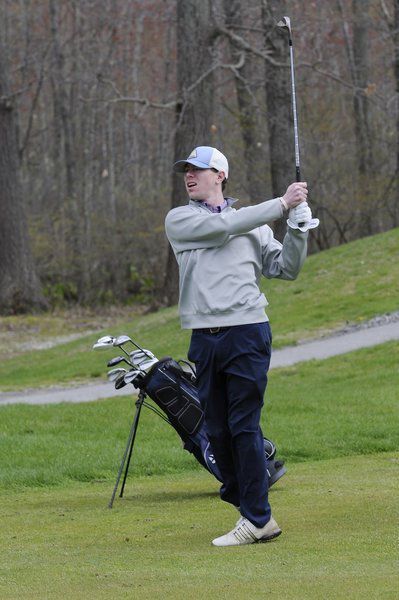 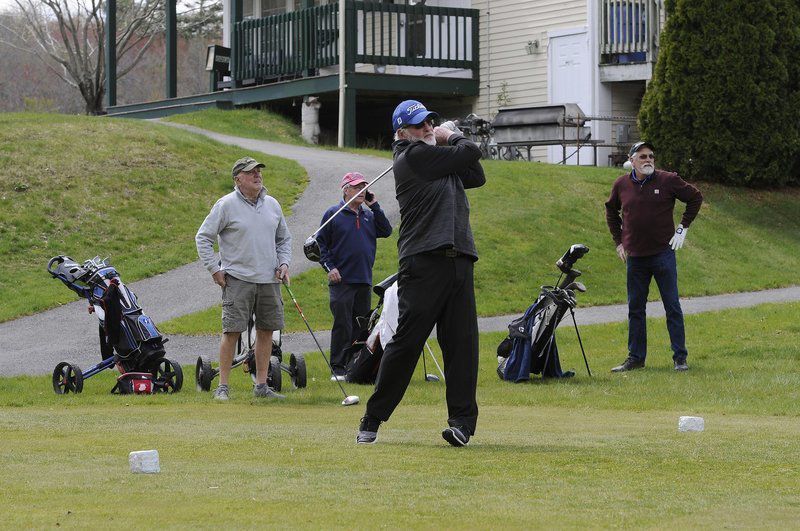 TIM JEAN/Staff photoTim Bresnahan of Haverhill watches his drive from the first tee while playing golf with friends at Bradford Country Club. Watching in back are, from left, club members Dick Corsetti, Bob Kennedy and Mark Taffe.

TIM JEAN/Staff photoTim Bresnahan of Haverhill watches his drive from the first tee while playing golf with friends at Bradford Country Club. Watching in back are, from left, club members Dick Corsetti, Bob Kennedy and Mark Taffe.

Jonathan Levinsen placed his tee down on the first hole at Bradford Country Club, took one practice swing, then let his 2020 golf season begin roughly six weeks later than normal.

The ball started moving left, then cut back to the right side of the fairway, going about 265 yards.

The drive was perfect -- in more ways than one.

“That felt really good, actually,” said Levinsen, 28, of Andover, who was playing with his buddy Connor Gaffney, 27, of Haverhill.

Like a lot of Massachusetts golfers, Levinsen and Gaffney were ready. They texted each other Wednesday night of last week, as rumors spread that Gov. Charlie Baker might allow courses to open the next day.

They found out it was happening for real via a tweet from Mass. Golf and on the radio.

“We were coming, no matter what, when it became official,” said Gaffney. “It’s been tough being stuck at home every day. We can follow the rules and be safe. So we’re here.”

Nearly every course in the area opened last Thursday, with the remaining few opening Friday.

Like golf anywhere during the COVID-19 era, there are strict guidelines that must be followed, including social distancing, tee times 15 minutes apart, online and remote payment options, flag sticks left in the hole, bunker rakes removed, and no practicing on the range or putting green.

One difference in Massachusetts from nearly every other state is that golf carts are not allowed, which hurts the courses a bit because rentals are a moneymaker.

Mark St. Jean of Methuen had an interesting story beyond the fact he’s been aching to play golf.

His wife, who has autoimmune issues, got COVID-19 and had a difficult few weeks, but she has recovered.

“I don’t have anything going on, so this is going to be amazing,” said St. Jean, 29, while awaiting his turn near the first tee in Bradford.

“I’ve been outside doing yard work,” he said, “but that’s not the same. I play two or three times a week normally. I’m just excited to be out there.”

Far Corner Golf Club near the Bradford-Boxford line had been ready to open for a few weeks, and when the governor’s approval was noted, the club was open for business.

“The phone has been ringing off the hook all morning,” said Far Corner director of golf Bob Flynn, whose family has been in the business for six-plus decades.

“We’re just happy to be back,” said Flynn. “We’ve been working on the course all spring. It’s in great shape. We’re excited to show it off.”

Mike Woods of Wilmington will vouch that it was hard to call the Far Corner course last Thursday morning to set up a tee time for him and his three buddies.

After six attempts and six busy signals, he drove a half-hour to Boxford to make sure he could get a tee time.

“This is one of my favorite courses, and I wanted to make sure we could get out here on Friday,” said Woods. “Golf is important to a lot of us. We get a little exercise. It’s a good way to socialize with your buddies, get in a few laughs. We really needed this.”

There were a few comments about Massachusetts being the last state to announce it would open courses, saying politics and optics probably were at play.

"I think the governor was scared of the push-back and the association with Trump," Levinsen said of Baker being associated with the president. "But that's in the past. We're playing golf again. That's good."

Here are restrictions that must be followed on Massachusetts golf courses:

Tee times must be 15 minutes apart.

Online and remote payment options must be available.

Flagsticks must remain in the hole.

Golfers may not practice on the range or putting green.

Restaurants cannot serve inside, only by delivery to golfers.