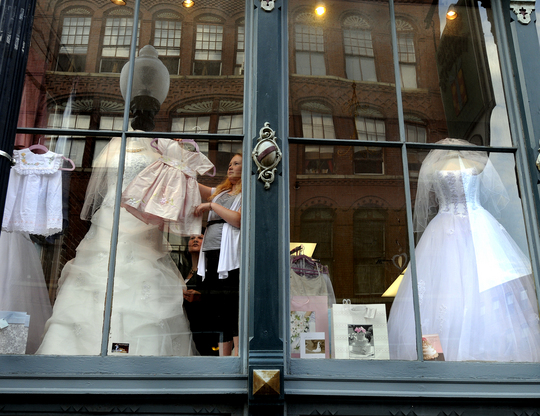 Margaret Sims-Goodrich, owner of Bride To Bride Boutique & Upscale Consignment and her daughter, Katie Goodrich, 9 prepare the window display. The boutique, located at 63 Wingate Street in Haverhill will open on Saturday, July 23. 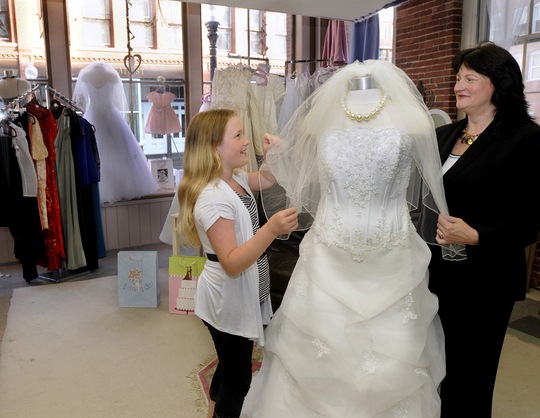 Katie Goodrich, 9, prepares a wedding gown for display. The new boutique, located at 63 Wingate Street in Haverhill, is scheduled to open on July 23. 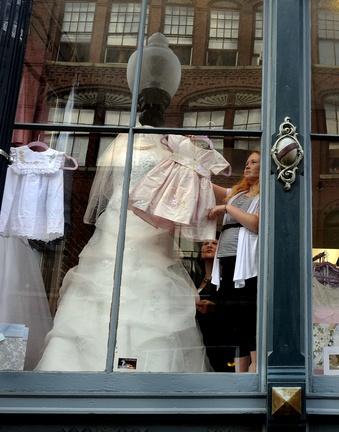 Margaret Sims-Goodrich, owner of Bride To Bride Boutique & Upscale Consignment, watches as her daughter, Katie Goodrich, 9, hangs a dress in the shop window.

Margaret Sims-Goodrich, owner of Bride To Bride Boutique & Upscale Consignment and her daughter, Katie Goodrich, 9 prepare the window display. The boutique, located at 63 Wingate Street in Haverhill will open on Saturday, July 23.

Katie Goodrich, 9, prepares a wedding gown for display. The new boutique, located at 63 Wingate Street in Haverhill, is scheduled to open on July 23.

Margaret Sims-Goodrich, owner of Bride To Bride Boutique & Upscale Consignment, watches as her daughter, Katie Goodrich, 9, hangs a dress in the shop window.

Nestled between the storefront windows of 62 Wingate St. rests a cardboard sun smiling out to the world.

For years, the cutout has been passed from one shop owner to the next at the location. Typically, the painted sun gets put into the dark of a storage closet whenever a business closes its doors there.

Now the sun is smiling on Margaret Sims and her soon-to-open business, Bride to Bride Boutique and Upscale Event Consignment.

"This was a dream of mine for over 20 years," Sims said. "We scraped the money together to do this."

Specializing in wedding dresses and higher-end formal wear, Sims wants Bride to Bride to offer a premier location for consignment wedding dresses. Before opening the shop, Sims spent the past eight months acquiring more than 100 dresses through craigslist and other websites to make gently used dresses available to customers.

"A lot of dresses are ones the customers bought, but the wedding just didn't happen," she said.

The road to the new business was far from easy, Sims said.

She formerly held a job as a police officer in Florida while her husband, Craig Goodrich, worked as an officer for the Salisbury Police Department. The two met during a conference and eventually gave up their careers to raise their daughter, Katie, and try their hand at the real estate market.

But her family lost most of their income to the failing market in 2009.

After moving from their Florida home to Massachusetts to live with and take care of Goodrich's then-ailing parents, finding work became a daily struggle for Sims and her husband. She said that within a three-month period, she sent out 875 resumes for any and all positions, even retail sales jobs.

"I was getting no call-backs," she said.

After going to dinner with a friend on Washington Street, Sims said she fell for the character of the city immediately, noting the colorful public art displays and the historic look of the old shoe factories.

"I started researching and found this was a really neat little town," she said.

Now, just days away from opening her business, Sims said the entire experience has started to turn her life around.

"It's kind of surreal," she said. "I'm looking at how much work needs to be done before the sign on the door says 'open.' My daughter is the most excited to see that sign flip to 'open."'

Other local businesses are excited to see the shop open as well.

Lisa Senter, owner of the New to You Boutique and a 15-year veteran of the consignment shop scene, said she has opened up communication with Sims to share customers.

"We can only benefit from one another," Senter said. "We're keeping it local. It doesn't draw people downtown to have empty storefronts.''

Sims' husband has also rejoined the Salisbury police force and his parents have started the road to better health.

In the future, Sims said she hopes to expand her shop to include bridal accessories, stationary and even men's clothing. She'd also like to start a donation service for low-income girls seeking prom and formal dresses.

"I have tons of ideas running through my head," she said.